and other problems with alternative authorizers of charter schools
Page created September 8, 2013

The 19 Gulen charter schools operating in Ohio in 2012-13 were authorized by two agencies, neither of which are local school boards:

Without the sponsorship of these authorizers, the schools would not continue to operate.  How is it that these agencies continue to renew the charters, despite the rampant abuses in these schools?
It pays to authorize charter schools

As in some other states, charter school authorizers in Ohio are allowed to charge a percentage of a school's revenue in exchange for sponsorship.

A 2012 audit for Noble Academy Columbus says:
"On May 6, 2010, the School renewed its sponsorship agreement with Buckeye Hope Foundation for five years. The Sponsor is responsible for evaluating the performance of the School and has the authority to deny renewal of the contract at its expiration or terminate the contract prior to its expiration.  According to the contract agreed by both parties, the School pays 3% of its foundation revenues to the Sponsor. In fiscal year 2012, the schools [sic] compensation to the Sponsor occurred as $39,502."

That is just one school; similar percentages apply to the other schools.

Based on school audits, the Educational Service Center of Lake Erie West receives 1.5% of foundation revenues in exchange for sponsorship.  Therefore its revenue from charter schools, while less than BCHF, is still substantial.  This entity appears to be a government agency affiliated with Lucas County, Ohio, but no financial statements could be found online.
What expertise do these alternate authorizers have?    Who oversees the overseers?

According to the Buckeye Community Hope Foundation's website, it has the "mission of developing affordable housing for low-income families and individuals."  This is a worthy cause.  However, it has little to do with education.  Does this agency have the competence to assess and oversee charter schools?

BCHF is a tax-exempt non-profit private corporation.  Since its board is not elected, how is the BCHF accountable to the public?  Who oversees BCHF to make sure it is fulfilling its responsibility to the public of overseeing the charter schools it authorizes?

The answer is that BCHF, like other alternative authorizers in Ohio and some other states, is hardly accountable to anyone.  These agencies face virtually no penalties for dereliction of their duty to perform proper oversight.

Such dereliction has already occurred; the White Hat charter schools are just one egregious example.  See this news article from July 2013; see also here and here.

Additionally, the large geographical distances between BCHF or the Educational Service Center of Lake Erie West and the schools they sponsor make oversight challenging.
Ready to drive 173 miles to that board meeting?

The Buckeye Community Hope Foundation, located in Columbus, is authorizing schools that are up to 173 miles away by car.  The situation is the same for the Educational Service Center of Lake Erie West.  How many parents at these distant schools will have the time and money to attend board meetings?  How will their voices be heard? 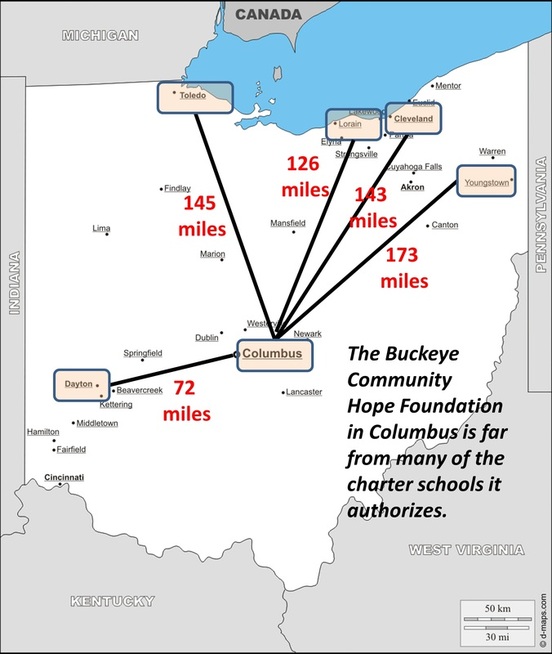 Acknowledgment:  thanks to d-maps.com for providing the Ohio map.

Furthermore, BCHF's website gives no information at all about any board meetings.  ESC of Lake Erie West's website gives the dates of board meetings but shows no meeting agendas or minutes.
Which is more democratic?
(1) The local school board, with their elected members and local board meeting times, agendas and minutes regularly posted online?
(2) Or a remote authorizer with an unelected board that says nothing on its website about its next board meeting?

One hackneyed line about charter schools is that alternative authorizers are necessary because school boards see charter schools as competition and do not want to authorize them.  "It's like asking MacDonalds permission to open a Burger King franchise," the soundbite goes.

The press often obligingly reprints this argument without noting its fundamental flaw: school boards are elected.  If the majority of the public wants more charter schools, they can elect a new school board that listens to their will.

The same is not true of alternative authorizers such as non-profits or state-level agencies that are unelected, susceptible to influence-peddling, and staffed by appointees often specifically chosen to be strongly pro-charter.

Another flawed argument asserts that if alternatively-authorized charter schools get sufficient enrollment, or even "waiting lists," this proves that there is a "need" for them.  The fact that some members of the public take advantage of a government service does not prove that there is a need for that service.  If the government starts using tax dollars to operate Free Doughnut Handout Centers, these centers will likely have long "waiting lists" of people.  This does not prove that they are needed, or that the majority of taxpayers find them to be a good use of tax dollars.

Perhaps a small number of parents are happy with such a decision, but they are a special-interest group.  Taking away an elected school board's control of its own budget in this manner is undemocratic.  The agency making the decision to have a charter school should also be the agency paying for it.
Conclusion

At first it seems mind-boggling that Gulen charter schools continue to operate in Ohio after all the revelations of abuses (see also charterschoolwatchdog.com for disturbing inside information about these schools).  Yet it can perhaps be partly explained by considering the powerful financial incentive that their authorizers have to keep them in operation.

As with many states, Ohio's system of charter authorization and accountability is deeply flawed.

"Profits and Privatizations: The Ohio Experience" by Amy Hanauer.  In: "Keeping the Promise? The Debate Over Charter Schools" (book) edited by Leigh Dingerson, Bob Peterson, Barbara Miner, Stephanie Walters.  Publisher: Rethinking Schools Ltd.  ISBN  978-0942961386.  Much of the chapter can be previewed with Google Books (link).