Queen City Academy Charter School was a proposed Gulen charter school for Bangor, Maine.  Applications for the school were submitted for the 2012-13 and 2013-14 school years, and both were rejected.  CASILIPS has a copy of the 2013-14 application, although as of December 2016, it could no longer be downloaded from Maine government websites.  (Note that this proposed school does not appear to have any connection to the existing Queen City Academy Charter School in New Jersey, which is not a Gulen charter school.)

The application for the 2013-14 school year contains several references to Zeynep Turk, who is listed as a member of the Governing Board: 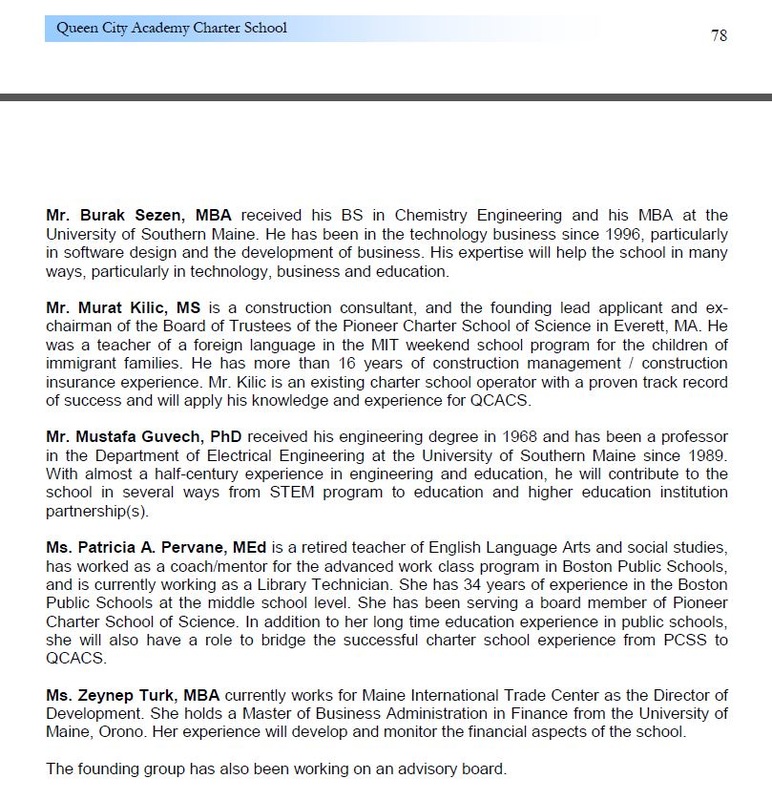 In addition to the above mention, Ms. Turk's name also appears twice on a Form 1023, which is an application to the IRS for 501(c)3 tax exemption for a non-profit.  This Form appears as an attachment to the charter school application, as part of the 371-page pdf that was a single document downloadable from a Maine government website at the time the application was current.  Because this Form 1023 is unsigned, it is unclear if it was ever submitted to the IRS, or if it was simply attached to make the charter school application look better.  The following two images show excerpts from this Form 1023: 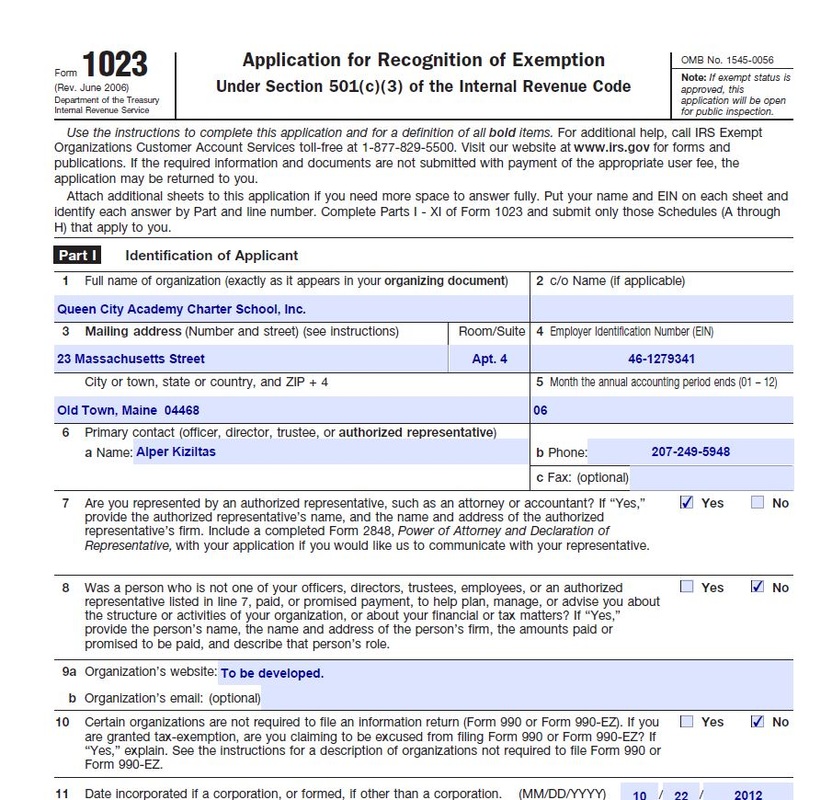 To Whom It May Concern:

I noticed that my name is listed as a Petitioner for the Queen City Academic Charter School (QCACS) on the Gulen Charter Schools website, http://gulencharterschools.weebly.com/proposed-gulen-charter-schools.html .  I would like to state that my name was used inappropriately as I never was an official petitioner and I was never informed that my name was used as an official petitioner.  Eyup Us of Turkish Cultural Center of NH approached me and asked me to be a board member of QCACS and I told him that I was not able to take on that responsibility.  Other than that conversation we did not have a conversation about this and about me getting involved as a petitioner.  I would like my name to be taken out of this document immediately.

Subsequently, on August 29, 2016, CASILIPS received the following email from "Janine B. Cary <jbcary@mitc.com>"
Subject: Misinformation on your website

I have been notified that my Senior Trade Advisor – Zeynep Turk is listed on your Gulen Charter Schools website as a Petitioner for the Queen City Academic Charter School(QCACS), http://gulencharterschools.weebly.com/proposed-gulen-charter-schools.html .

Please note that Zeynep never served in this capacity and this is misinformation. Eyup Us of  the Turkish Cultural Center of NH approached her to be a board member of QCACS and she declined the request.  I kindly call for you to please remove her name from this document as soon as possible.

The first noteworthy point about these emails is the assertion that someone from the Turkish Cultural Center of New Hampshire was involved in the application process for Queen City Academy Charter School.  The Turkish Cultural Center of New Hampshire is known to be a Gulenist organization, and indeed is a member of the Turkic American Alliance, the umbrella Gulenist organization for the United States.  This is therefore an indication of a direct connection between the Gulen Movement and this charter school application.

A letter from Keschl in support of the Queen City Academy Charter School appears as an attachment in the above-mentioned 371-page pdf application document: 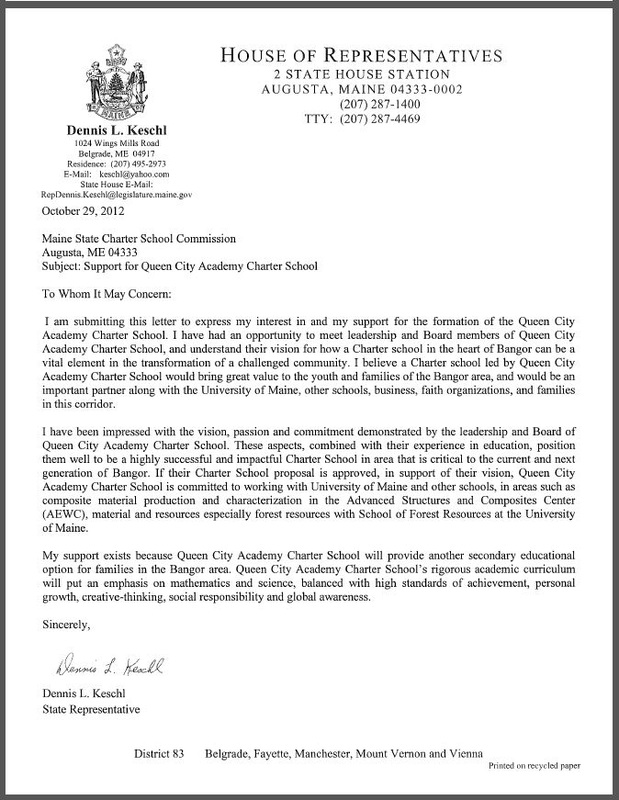 Colin Woodard of the Portland Press-Herald wrote about the Gulen ties of the Queen City Academy Charter School application in his Feb 17, 2013 article entitled "Proposed Bangor charter school linked to Turkish imam."  In this article, he quotes a "central figure" behind the charter school application, Murat Kilic of Revere, Massachusetts, as dismissing the importance of any connections to the Gulen Movement.  Note that, and then read again, from the two emails above, how "Eyup Us of the Turkish Cultural Center of NH approached" Ms. Turk and asked her to serve on the school's board.

The second noteworthy point about the emails shown above from Ms. Turk and Ms. Bisaillon-Cary, are that they allege that Ms. Turk did not ever consent to be a member of the Queen City Academy Charter School board.  Yet her name appears several times in the application, and indeed her CV is included as part of the application.  How did the lead applicant, Alper Kiziltas (a.k.a. Kiziltash) obtain a copy of her CV and use it without her permission?  If she indeed did not consent to be a board member, was this charter school application fraudulent?  What about the IRS Form 1023 showing her as a board member?  Was that form ever signed and sent to the IRS?  If so, would it be fraudulent? (The signature on this form comes under the line "I declare under the penalties of perjury that I am authorized to sign this application on behalf of the above organization and that I have examined this application, including the accompanying schedules and attachments, and to the best of my knowledge it is true, correct, and complete.")  The other possibility that remains is that Ms. Turk did consent, even though she is now denying it.  It is impossible to prove whether or not this is true, and there is no intention here to speculate either way.  It can only be noted that, as documented repeatedly on this website, there is a recurring pattern in the Gulen Movement of denial of involvement.