The H-1B visa system is being used to import teachers of English, English as a Second Language, Social Studies, Physical Education, and other non-STEM subjects from Turkey and Central Asia.  It is also being used to import accountants, financial managers, IT workers, legal staff, librarians, and administrators.  Use of the H-1B visa is justified by claims of a "shortage" of qualified American workers, yet no demonstrable shortage exists in any of these fields.  It seems highly improbable that the most qualified person to fill the position of English teacher would come from countries such as Turkey, Azerbaijan or Turkmenistan. 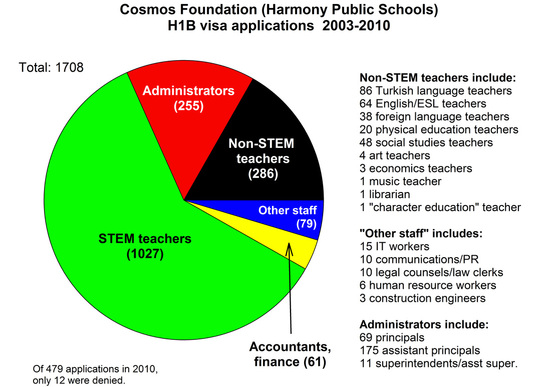 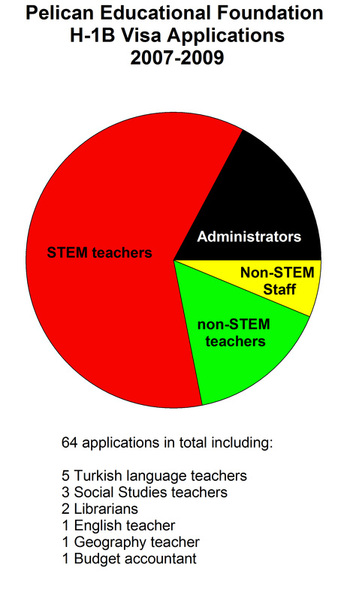 While questions could be raised about many of these applications, the importation of Gulenists to teach English or English as a Second Language, which has occurred in many other Gulen charter schools as well, seems particularly inappropriate.  One consistent theme that has emerged from Gulen charter schools across the U.S. is that nearly all the Gulenist teachers, who come from Turkey or Central Asia, have limited English proficiency.  This is admitted even by the Gulenists themselves.  In April, 2008, The Worcester Telegram and Gazette ran an article on Putnam Science Academy, a private Gulen school in Connecticut.  The article reported that the school had outsourced its entire English as a Second Language program to Worcester State College.  The reason given was as follows:

"The leaders of the private Putnam Science Academy, as the name suggests, are confident in their ability to teach high school boys science and math.   'When we come to teaching a language, it’s a different story,' said Vice Principal Tarkan Topcuoglu."

It was already noted on another page that an article published on Gulen's own websites describes how the Gulenist teachers in South Africa are less effective because of their limited English skills.  The author further notes that the Gulenist system of constantly rotating teachers (the "hijrah" or "migration") exacerbates this problem, as after a couple of years when the teachers have started to become more fluent and proficient, they are ready to be transferred out of the school.  These issues are not limited to South African Gulen schools; in fact the exact same pattern has been noted in the Gulen charter schools in the U.S.

In March 2010, the Dallas Morning News, in an article on the Harmony Science Academy chain of charter schools in Texas, mentioned the fact that these schools hire a large number of teachers on H-1B visas.  The reason cited was a "shortage of qualified math and science teachers in Texas."  Superintendent Soner Tarim was quoted as saying that the Harmony schools always try to find qualified Americans first.

When Superintendent Ozkur Yildiz was asked by a Tucson reporter about the large number of H-1B visa applications filed by Sonoran Science Academy schools and their charter holder, Daisy Education Corporation, his response was that they were necessary because the schools were unable to find adequate math and science teachers in the United States, and also because the school chain was growing rapidly.

Neither Superintendent explained why both these school chains, along with other Gulen charter schools across the U.S., have used the H-1B system for a number of positions that have nothing to do with teaching math and science.

Another question is why, if these schools must go abroad to find qualified math and science teachers, they are exclusively hiring from among Turkic, Gulenist teachers.  If the positions were advertised through mainsteam channels, and if hiring decisions were unbiased, it seems clear that some of the teachers would be coming from other countries that produce large numbers of graduates who are highly trained in math and science.

Further, Cosmos' filing of 86 applications for Turkish language teachers is difficult to justify.  Many parents consider languages such as Chinese or French to be a higher priority for their children to learn.

The use of the H-1B visas for legal and accounting staff raises suspicions that there is a desire to keep the positions "in-house," the better to further the Gulenist agenda, or to keep the inner workings of the schools confidential.

For further information on the abuse of the H-1B system by Gulen charter schools, the article "Gulen schools and their booming H1B visa applications" is highly recommended.