Are the charter schools connected to Gulen?  Part 2

Yet more evidence is presented here:

The New York Times, April 24, 2012:
"Gulen followers have been involved in starting one of the largest collections of charter schools in the United States."


On September 21, 2009, Today's Zaman printed an English translation of an article from the Turkish newspaper Sabah.  Here is a screenshot: 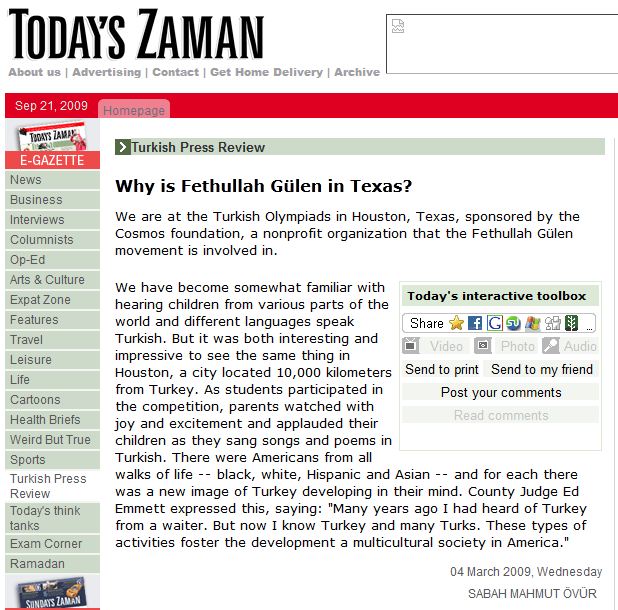 Albany Times-Union  June 19, 2012
"The Turkish Cultural Center of Albany, it quickly becomes apparent, is part of a vast network of similar Turkish centers across the United States, all affiliated with the Hizmet movement. ... There are now more than 120 Hizmet-affiliated charter schools in the United States."
[Note: "Hizmet" is one of several alternate names used for the Gulen Movement.]


Middle East Report  Fall 2011 "Media Wars and the Gulen Factor in the New Turkey"
by Joshua D. Hendrick
"Similar allegations are beginning to emerge in the US, where the Gulen movement operates more than 100 publicly funded charter schools.


The Oklahoman, May 24, 2011
"Social scientists who have studied the movement, say the schools are part of a broader international movement that has millions of followers and is based on the teachings of peace and interfaith respect preached by Fethullah Gulen, an elderly Islamic Turkish scholar."


From a paper on Gulen's own website entitled "The Gulen Movement as a Mechanism for Integration of the Muslim Community in Europe: Potentials and Constraints" by Fatih Tedik:
"At that point, it should be noted that, the history of the movement in Europe and in Muslim World is quite short, but as a beginning, they have a good start in the Netherlands with almost all sorts of institutions and activities, in the United States with a striking rise in the amount of state-financed charter schools and in Kurdish controlled Northern Iraq with seven schools and despite a pretty slippery ground."


60 Minutes, May 13, 2012
"Over the past decade scores of charter schools have popped up all over the U.S., all sharing some common features.....they're founded and largely run by immigrants from Turkey who are carrying out the teachings of a Turkish Islamic cleric: Fethullah Gulen. .... There are a total of about 130 charter schools like Harmony in 26 states. Together they form the largest collection of charter schools in the country. Here's what's curious: they're founded and run by immigrant businessmen and academics from Turkey. Why are they building public schools here?  Well, the answer seems to lie with this mystery man: the Turkish imam Fethullah Gulen who tells his followers that to be devout Muslims they shouldn't build mosques - they should build schools; and not to teach religion, but science."
[Side note: In fact the Gulen Movement has built mosques, and some of its schools do teach religion.  See here for more details.]