Gulenist Self-Empretzelment
Admission on fgulen.com website that
Paterson Charter School for Science is a Gulen school

The Gulen Movement has created scores of websites denying the existence of Gulen charter schools, and denying that Fethullah Gulen has anything to do with any charter schools.  Even while all this website propaganda activity has been occurring, Gulen's connection to Paterson Charter School for Science and Technology in New Jersey has been openly admitted on "Fethullah Gulen's official website."

See for yourself at this link:
http://en.fgulen.com/conference-papers/323-gulen-conference-in-indonesia/3729-thomas-michel-the-thinking-behind-the-gulen-inspired-schools

Here is a screenshot: 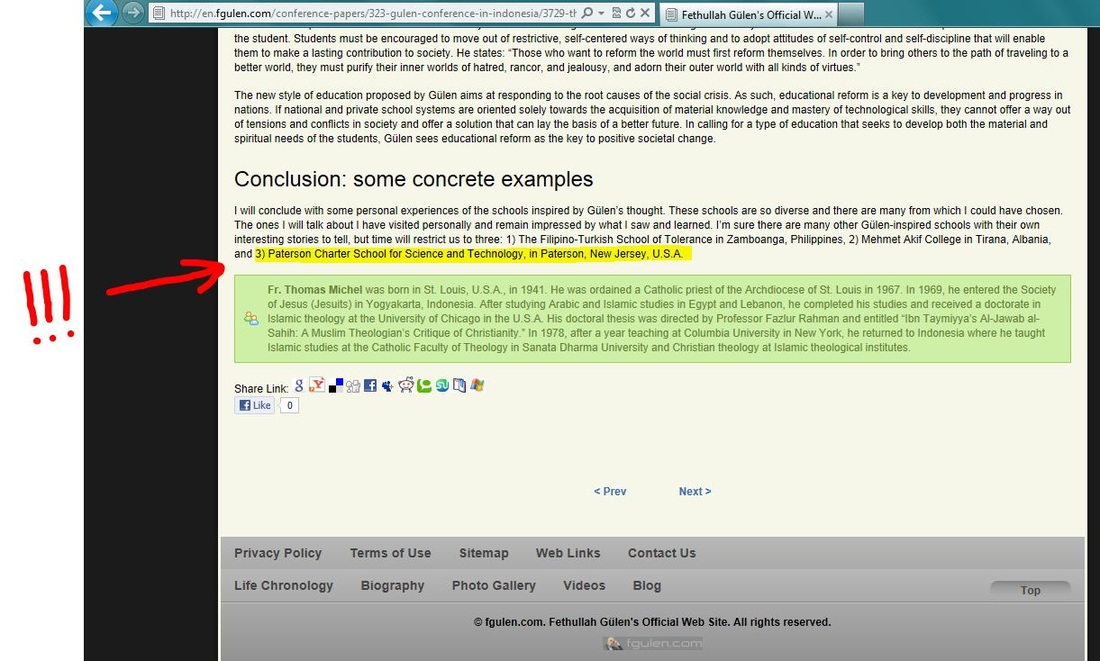 At the bottom of the page, it says "fgulen.com Fethullah Gulen's Official Web Site."

The text says (boldface and color emphasis added)
"Conclusion: some concrete examples
I will conclude with some personal experiences of the schools inspired by Gulen’s thought. These schools are so diverse and there are many from which I could have chosen. The ones I will talk about I have visited personally and remain impressed by what I saw and learned. I’m sure there are many other Gulen-inspired schools with their own interesting stories to tell, but time will restrict us to three: 1) The Filipino-Turkish School of Tolerance in Zamboanga, Philippines, 2) Mehmet Akif College in Tirana, Albania, and 3) Paterson Charter School for Science and Technology, in Paterson, New Jersey, U.S.A."

The article, which is by Thomas Michel, starts out with the lines:
"Today I want to discuss what, in my opinion, is one of the most interesting phenomena occurring today in the world of education. I am referring to those institutions usually referred to loosely as the “Gulen schools” or “schools of the Gulen movement.” These schools should not be thought of as a type of centralized school system, but rather as a loose collection of independent schools created and operated according to the pedagogical vision of the Turkish intellectual, Fethullah Gulen."

Here is a screenshot of the top of this webpage, showing these first lines: 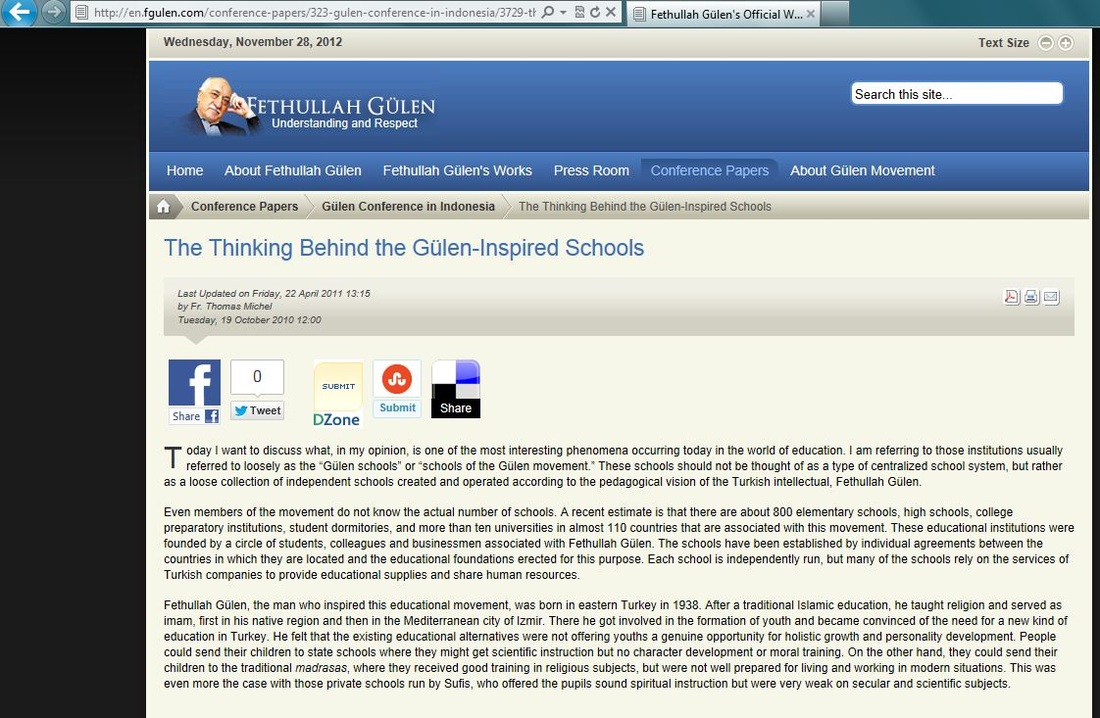 Thomas Michel is quoted incessantly by the Gulen Movement.  In particular, he is the source routinely cited for the claim that the Philippine Turkish Tolerance School (an elite private school) is having a significant effect on promoting peace in the Philippines.  If Gulenists wish to claim that his statements about the Paterson Charter School are inaccurate, then they would be suggesting that his statements about the Tolerance School, as well as his many other statements supporting the Gulen Movement, should also be called into question.