These publicly-funded charter schools in the Atlanta, Georgia area are run by the Grace Institute for Educational Research and Resources, Inc. which has since been renamed Charter Educational Services & Resources.  The name of TEACH ("Technology Enriched Accelerated Charter High") has been changed to Fulton Science Academy High School.  Fulton Science Academy Middle School had its charter revoked in 2012 because of a number of problems.  The Fulton Educational Services, Inc corporation is affiliated with these schools.

In the comments section of this Atlanta Journal-Constitution article, Hakan Berberoglu, using the name "Gitano Bandolero," attacks other commenters for noting the connection between Fulton Sunshine Academy and the Gulen Movement; Berberoglu is assistant director of the Chicago-based Niagara Foundation, which has Fethullah Gulen as honorary president.  (The comment in which Berberoglu was identified has apparently been removed by the newspaper.)

A 2010 document from River City Science Academy in Florida giving a tentative itinerary for the spring break trip to Turkey shows a stop at "Coskun College, sister school of FSA."  The document's metadata shows its title as "Fulton Science Academy."  Coskun College is known to be a Gulen school.

Additional evidence can be found on this page, which explains the financial connection between Fulton TEACH High School and the Gulenist company Sema Education and Health Development Co, Inc, and on this page, showing how a group of Fulton students attended a summer program at an overtly Gulenist religious school in Turkey.  On this page, translated from a Turkish newspaper, an FSA board member is quoted as saying he is a follower of Fethullah Gulen.  A Nov 24, 2011 article (in Turkish) of the Turkish news outlet "soL" noted the connections of Fulton Science Academy and one of its founders, Yucel Altunbasak, to Gulen.

See also: letter from Fulton parent; and for information on academics, see an analysis of college prep at FSA compared to other Fulton County schools.


The multiple affiliations of the following individuals, both past and present, give further evidence of FSA's connection to the Gulen Movement:

Murat Cetin
Ahmet Dastan a.k.a. Ahmed Dastan, Matt DastanNote: The Niagara Foundation in Chicago is a prominent Gulenist organization.  BAKIAD subsidizes numerous Turkey trips for Americans; some are "interfaith" and some are organized through schools.

Mustafa Kececi
Note: TACC Southeast is a Gulenist organization, as evidenced by the following statement on the Istanbul Center website: “The purpose of the meeting was to brief Governor Perdue about Istanbul Center, telling him about its events and programs, as well as those for the Turkish American Chamber of Commerce of the Southeast (TACC Southeast), a sister organization.”


The following image shows the domain registration for gulenschools.org as it appeared on the website www.domaintools.com on May 16, 2011.  The domain was registered to Baybars Bakay, who was a teacher at Fulton Science Academy and is affiliated with Grace Institute for Educational Research and Resources : 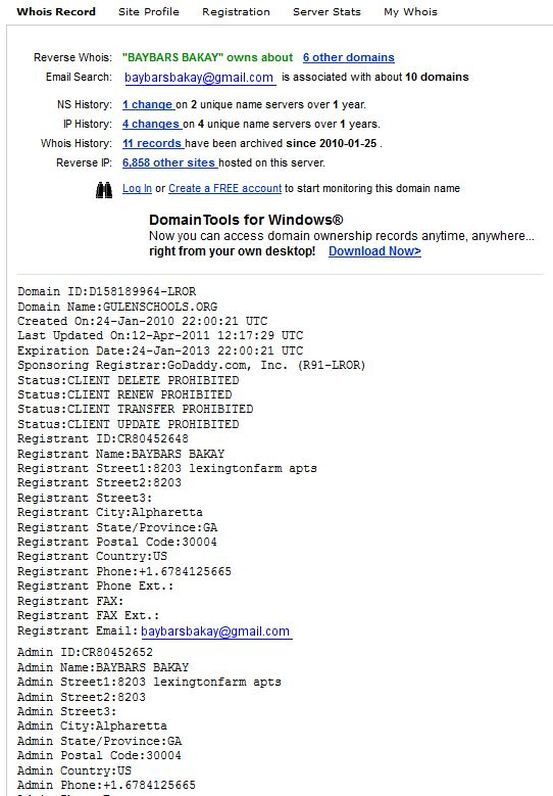