The Academy of Business and Entrepreneurship Charter School (ABECS) is a proposed charter school within the School District of Lancaster in Lancaster, Pennsylvania.  The planned opening is August 2013, initially with grades K-4, and then adding a grade each year.

This proposed school has encountered very strong and widespread community resistance.  An online petition by a local parent opposing the application already had 267 signatures as of March 5, 2013.

On March 19, 2013, the school board will vote on whether to approve the application.  While a "no" vote appears likely, this may not be the end of the story.  As shown by the example of the Gulen-affiliated Young Scholars of Western Pennsylvania school, would-be charter school founders can appeal at the state level and win, despite significant local opposition.  (YSWP's application was rejected by an 8-to-1 vote of the Baldwin-Whitehall school board.  The Pennsylvania Department of Education later overruled that decision.)

July 10, 2014 update: A new application was submitted for the 2014 cycle.  After being denied by the school board again, the would-be founders are planning to appeal to the state.

See this new 2014 petition opposing the application for many details.
News articles

July 10, 2014  LancasterOnline, Lancaster PA  (link)
"Charter school takes Lancaster fight to state"
The would-be school founders are appealing their charter rejection to the Pennsylvania state Department of Education.  A petition with signatures was filed on July 3, 2014.

Sep 5, 2013 Intelligencer Journal, Lancaster PA (original link now dead)
"Proposed business charter school to submit new application"
A letter of intent has been submitted indicating that the Academy of Business and Entrepreneurship Charter School applicants intend to resubmit their application in November, for the 2014-15 school year. However, a spokeman for the proposed school says they have not yet decided whether they will proceed with submitting the full application. Locals say that if this happens, they intend to oppose the application again. The school board’s rejection of the application on the previous cycle cited “serious and pervasive deficiencies."

Mar 6, 2013 Intelligencer Journal, Lancaster PA "Charter school proposal draws friends and foes to SDL school board meeting" (link) This article covered the final public hearing for the application.  Significantly, Lancaster Mayor Rick Gray spoke out against the proposed school.  Lead applicant Sait Onal accused one critic of trying to tie the applicants to a "terrorist group," although this was refuted.

Mar 4, 2013 Intelligencer Journal, Lancaster PA "Charter school friends, foes air their feelings" (link)  Lead applicant Sait Onal is quoted as attributing his unseemly behavior at the recent school board hearing to a Red Bull energy drink that he consumed beforehand.  Some parents and residents are linking the school to Fethullah Gulen.  ABECS' first-year budget would be $2.4 million.  The School District of Lancaster's Assistant Superintendent notes that ABECS' application has similarities to other charter school applications.

Feb 20, 2013 Intelligencer Journal, Lancaster PA "Police called to wild school board hearing on charter school proposal" (link)  At the public hearing, an assistant superintendent from the School District of Lancaster criticized the proposed curriculum.  The meeting got out of hand as would-be founder Sait Onal accused critics of lying.  The police were called.

Jan 15, 2013 Intelligencer Journal, Lancaster PA "School District of Lancaster eyes charter school. Backers, foes give opposing views" (link) Public hearings on ABECS' application begin.  Ties to Fethullah Gulen are mentioned.  Lead applicant Sait Onal attempts to deny this, claiming "We are not associated with anyone, with any group, in any part of the world but here in Lancaster."  The proposed curriculum is criticized, with several members of the public, some with teaching experience themselves, saying that a focus on entrepreneurship makes no sense for a K-4 school.  Onal accuses the school's critics of "ignorance" and "racism."

Nov 4, 2012 Sunday News, Lancaster PA "Academy of Business & Entrepreneurship Charter School has eye on Lancaster city" (link)  ABECS' application is expected by the Nov 15 deadline.  It has already sent out solicitations for pre-enrollment to local residents.  In October, Adam [a.k.a. Adem] Oksuz sent an email to "many members of the local educational community, asking for letters of support."  The article notes that Oksuz was previously superintendent of an Arizona charter school that had been linked to Fethullah Gulen in several news articles.

The connection of Adam Oksuz to the ABECS application was mentioned in the Nov 4, 2012 news article.  Oksuz's connection is also shown by the appearance of his name in meta-data of a document on the ABECS website:
http://abecs.org/documents/Pre-enrollment%20Form%20ABECS.pdf

Adam Oksuz's and Serhat Sen's names in these meta-data are shown in the following images.  Note that file metadata for pdf documents can be viewed by right-clicking anywhere on the document and then selecting "Document Properties" from the drop-down menu. 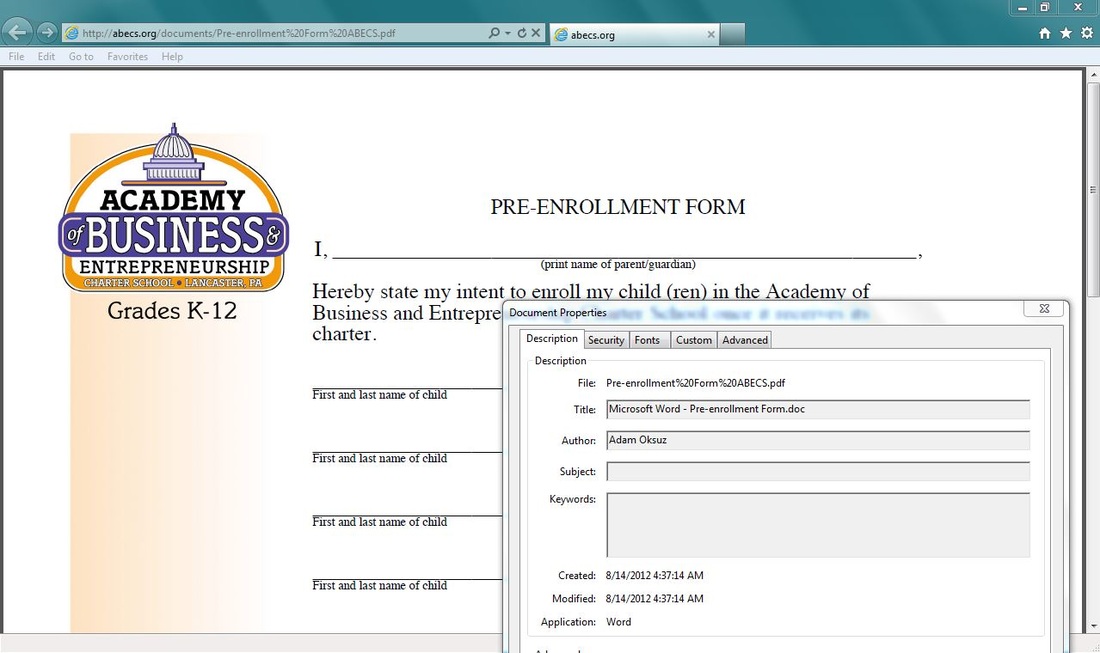 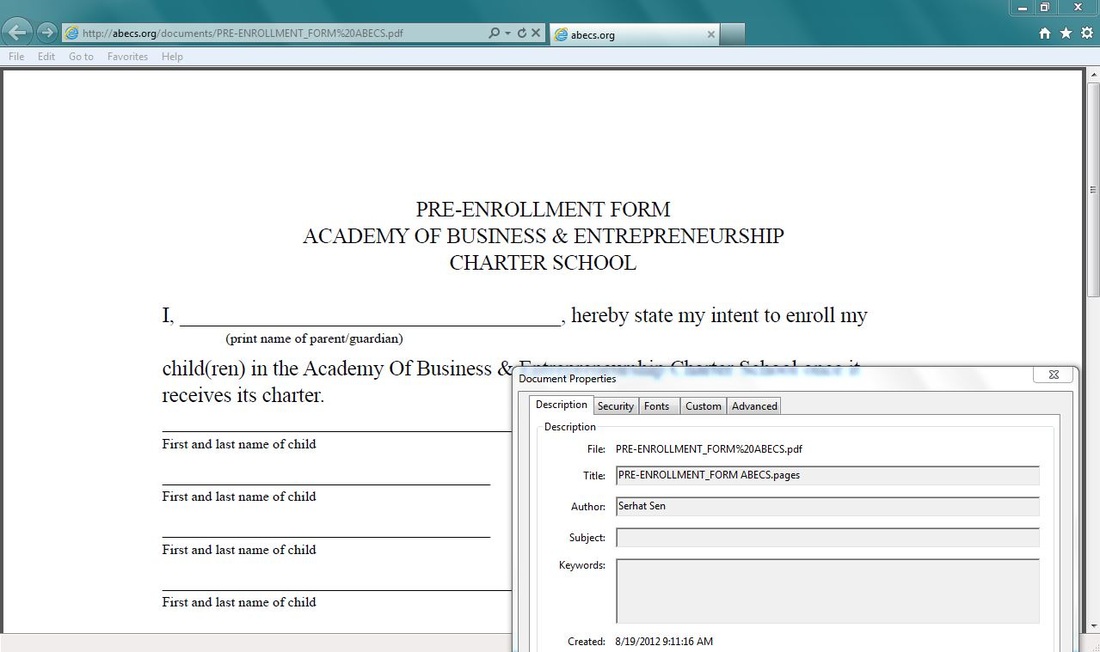 Connections of individuals associated with ABECS to the Gulen Movement

The multiple affiliations, both past and present, of some of the applicants or individuals associated with the charter application, show their connection to the Gulen Movement.

The Facebook page for Erie Biosciences Academy shows info@abecs.org as the contact email; this of course is the email for ABECS: 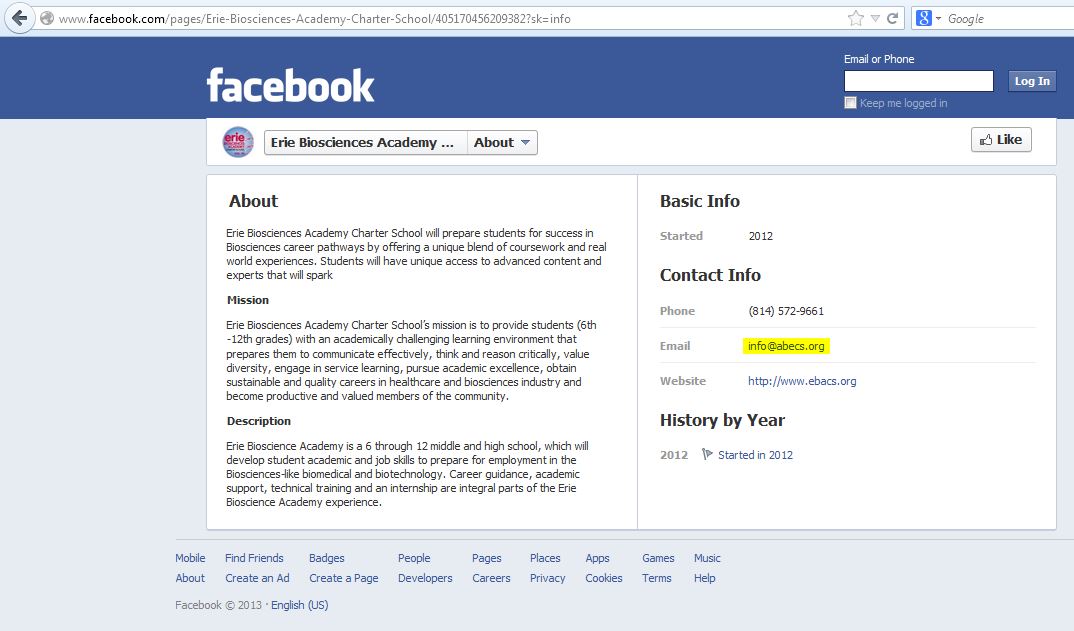 The Facebook page for the proposed Business Academy and Entrepreneurship Charter School to be located in Easton, Pennsylvania displays the sentence "Academy of Business and Entrepreneurship Charter School is committed to preparing its students to be successful in life and work in the technology-driven, globally-connected and competitive 21st century" (boldface added).  The appearance of ABECS' name here is puzzling.

Apparent plagiarism/copying from other schools

The Education page of the ABECS school website contains sections of text that are verbatim or very near-verbatim identical to that from other websites.  This may be plagiarism, a practice found with other Gulen-affiliated schools.  Even if the other websites consent to this copying, it is concerning that the proposed school cannot find its own words to explain itself.

The March 4, 2013 article in the Intelligencer Journal of Lancaster PA seems to indicate that State Senator Lloyd Smucker had no intention of withdrawing his letter of support for the school, despite the strong local opposition:  "Said state Sen. Lloyd Smucker, who penned a letter supporting the ABECS plan, 'I have absolutely no reason to believe that this is anything other than them being concerned and trying to help the community, trying to provide something they think will benefit the people who live here.'"

A concern is whether campaign contributions made to Sen. Smucker by the applicants and other Gulen-afiliated individuals could have influenced his position.

Interestingly, there was a cluster of donations on Dec 16-17, 2011, all from individuals with Turkish names, except for Indrit Hoxha (who is Albanian) and one "Dona Hon," which might possibly be a corruption of the word "donation" rather than a real name.  When this cluster is added to Onal's $1000 from April 25, the total is $7000 (that is 7 percent of Smucker's total take of $99,252 on that cycle).  Of the Turkish names shown for Dec 16-17, 2011, several have already been identified as having Gulenist affiliations:  Suleyman Denden with BATO, the Burlington American Turkish Organization; Bulent Ozdemir with the Peace Islands Institute; Haci (Mahmut) Tanis with the Red Rose Foundation (he also participated in at least one event organized by the Interfaith Dialog Center, now renamed Peace Islands Institute).  It has already been observed that Gulenists often make a cluster of political contributions to the same candidate on the same day or very close to the same day.  This may be to ensure that the recipient is aware that the donations are coming from a group; such awareness could prove useful when asking for favors in return.  The donations can be verified at the Follow the Money website.

One further point of interest is that Indrit Hoxha's donation to Lloyd Smucker was made when his address was still in Houston, Texas.  A review of all contributions for this cycle shows that no other individual contributed from out of state.  The very few entities that did were corporations.  How did Mr. Hoxha know in advance that he wanted to donate to Mr. Smucker?  It is difficult to escape the conclusion that Hoxha's involvement in starting a charter school in Lancaster was planned well in advance, while he was still in Houston.