On August 12, 2011, the City of Alpharetta's Development Authority approved 20 million dollars in bond money for the three Fulton schools, which are run by three separate but closely related charter holder companies, for construction at a 44-acre lot that is the future planned site of all three schools.  The bonds were given an investment grade rating by Fitch in September 2011.

The close relation of the FSA Middle and High Schools can be seen from the charter application for FSA High/TEACH which explicitly stated that the high school was created to serve graduating FSA middle school students ("With the approval of this proposal most of the Fulton Science Academy MS students will enroll in TEACH").  Founding board members on the High School proposal included Ayhan Korucu, Sherry Anne Saylam, Mustafa Basgun and Kemal Cem Gur, all of whom had been board members and/or founders of FSA Middle School.

FSA Middle School was named a National Blue Ribbon school in October 2011.  A local news article mentions that the three FSA schools "provide students a kindergarten through high school path with aligned curriculum options."  The Middle School principal, Kenan Sener, is quoted in this article as stating that "some ideas are only possible if they are done K through 12, such as college preparation....College preparation is not only the job of high schools. It should actually start in the elementary years. Having three sister schools working on the same goal together, we are hopeful that we will be able to help our students to enroll in their college of choice."  These quotes make it clear that FSA Middle and High have the same educational approach to college preparation.

FSA Middle's Blue Ribbon award was primarily the result of its performance on standardized test scores.  An article on the Georgia Charter Schools Association website states that "98 percent of FSA Middle students met or exceeded the standard on the 2011 Georgia Criterion Referenced Competency Test (CRCT), and on the Iowa Test of Basic Skills, FSA Middle students earned the highest scores among all Fulton County middle schools in all subject areas."

The following graph compares TEACH's average composite SAT scores (reading + math + writing) for the 2009-10 school year with the other high schools in the district of Fulton County Schools.  The SAT scores were obtained from the state of Georgia school report cards; as of the time of this writing, 2009-10 was the latest school year for which data were available.  Note that Northview High School is located only about 5 miles away from FSA High (as of October 2011). 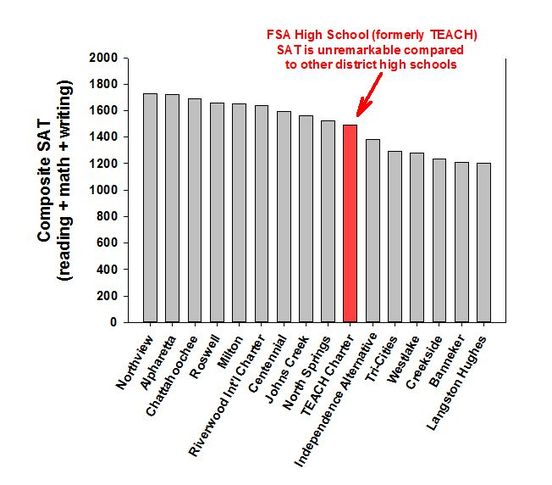 The comparatively unimpressive SAT scores are even less impressive when considering the very small number of test takers at FSA High/TEACH compared to most of these other schools: 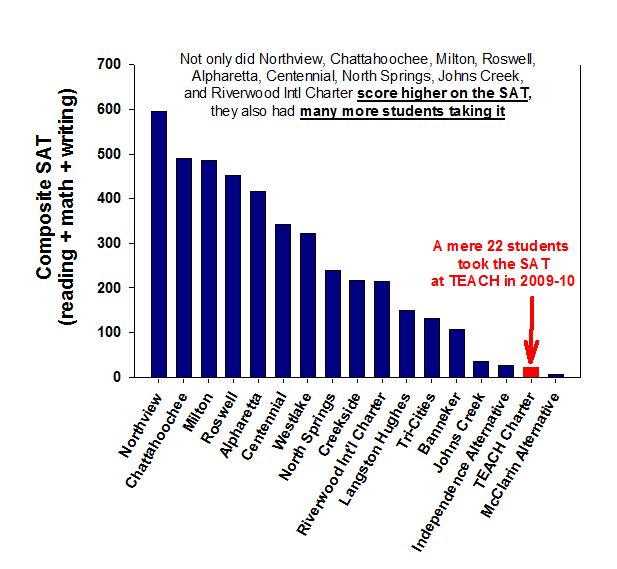 FSA High/TEACH is a relatively small school, so it might be thought that the low number of test takers is simply due to the much lower overall enrollment.  But even the percent of all enrolled students who took the SAT at FSA High/TEACH is small relative to the other district schools: 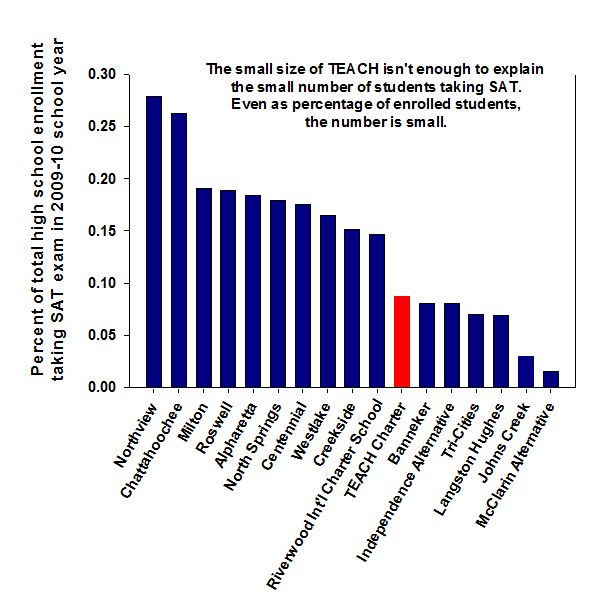 It might also be thought that the demographics of FSA High/TEACH explains its lower SAT scores.  Yet even when considered in terms of the average poverty level of the students, as measured by the percent eligible for free lunches (a widely-used measure of student economic status) FSA High/TEACH's performance is unimpressive: 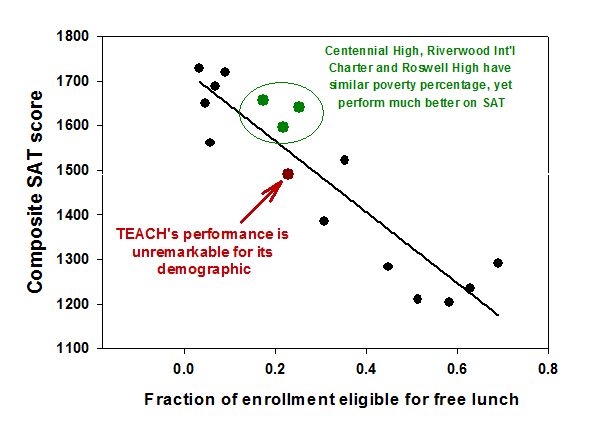 FSA promotes itself relentlessly as providing excellent college preparation, starting in middle school and even in elementary school.  Yet what fraction of the students who pass through FSA will even graduate from the high school?  Consider the following graphs showing huge attrition in the high school alone.  The attrition would be even larger if the middle school enrollment were also considered.  How is this "college prep" functioning for the large percent of students who do not complete 12th grade? 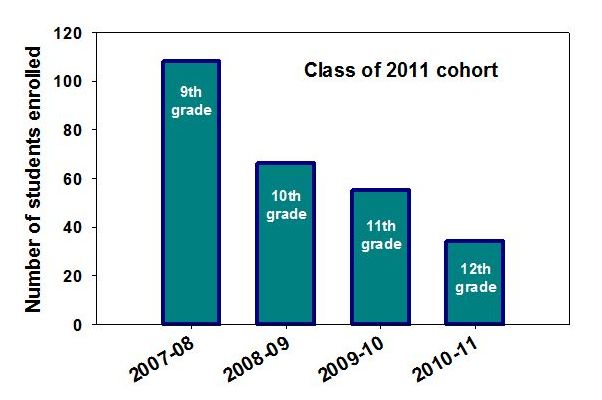 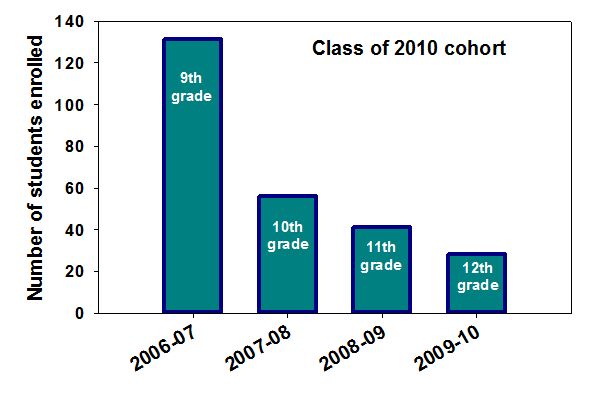 There may be parents at FSA who believe their school is special.  FSA may have been successful at creating a community or "family" feeling at the school, and at convincing parents (with the help of relentless PR) that they are doing an exceptional job.  Yet the bottom line for society and taxpayers is that schools exist to prepare students for adult life - such as, for example, entering college.  By this measure, regardless of the middle school's performance on any standardized tests, the triplet of FSA schools appears to be doing a mediocre job of producing high school graduates with good SAT scores, as can be seen clearly from the state of Georgia's 2009-10 "scoreboard" for FSA High/TEACH, which shows SAT scores of 1491 compared to the district's 1567.

What then is being accomplished in these schools that is not already being done better at, say, Centennial or Roswell High, or even Riverwood International Charter?  With Riverwood International Charter producing higher SAT scores than FSA High/TEACH at a similar poverty level, and with a much higher enrollment, why was FSA Middle School, the feeder school for FSA High/TEACH and a school that shares its educational program, chosen instead as Georgia's first charter to receive the Blue Ribbon Award?