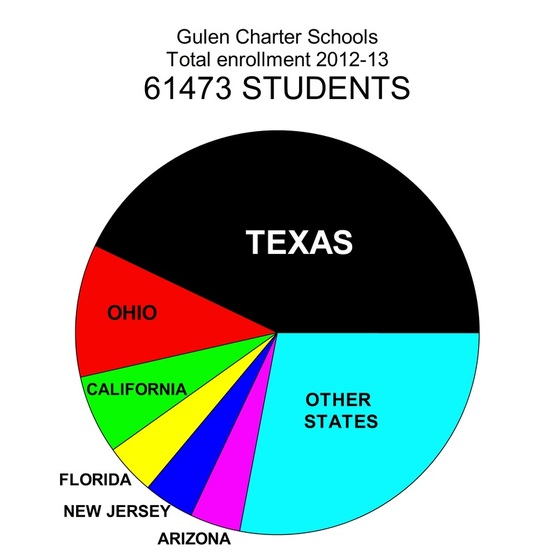 Acknowledgment: This page is heavily based on data from the Perimeter Primate blogger (link) who performed the Herculean task of looking up enrollment numbers for 134 schools.
Notes: Most numbers were obtained from the Perimeter Primate page (link), but a few modifications were made.  Enrollment counts for Harmony Science Academy Laredo (734 students) and School of Science and Technology Corpus Christi (494 students) were found using the "AskTED" report creator of the Texas Education Agency.

It is no accident that the states with highest enrollment - Texas, Ohio, California, Florida, New Jersey and Arizona - all have either state-level or alternative charter school authorizers.  This wrests control of charter schools away from the local community, and allows much more politicization of the process, i.e., more influence peddling.  Gulen charter school founders and operators are finding continued success in such states, while in other states where local school districts are the authorizers, new schools are much less likely to be approved because of concerns about abuses.  Another difference is that local (school district) authorizers usually give far more opportunities for input from the community.

Some graphs showing growth of enrollment of Gulen charter schools can also be found at this page (which dates from Feb 2011).