As of the 2012-13 school year, Concept Schools is managing 27 publicly-funded charter schools in the Midwest (Ohio, Indiana, Illinois, Michigan, Minnesota and Wisconsin).  Two new schools in this chain are slated to open in fall 2013, and Concept is applying (as of early 2013) for two more in the Chicago area.  Concept, with its central office in Illinois, gets around 10 to 12% of each member school's revenue up front. 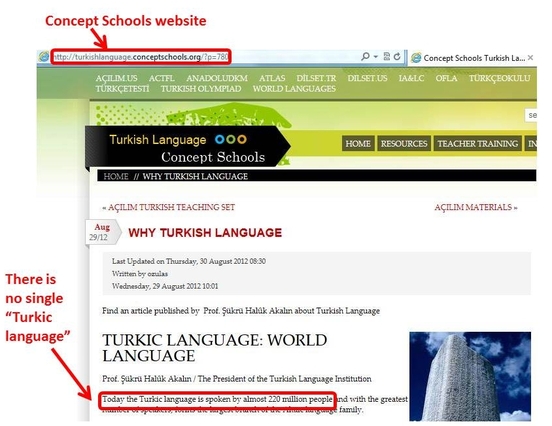 In fact, there is no such thing as "the Turkic language."  There is a family of languages called the "Turkic languages."  But a family of languages is completely different from a single language.
It's as if (hypothetically) someone were to write a page entitled "Why German?" for the purpose of encouraging students to study German, and were to start talking about "the Germanic language" (as if it were a single language) having 550 million speakers.  The Germanic language family, which includes English, may have 550 million speakers, but obviously they do not all speak a single language.  English speakers are not said to speak "Germanic," and English is for practical purposes not mutually intelligible with German.  By the same token, Kazakh, Uzbek, and other Turkic languages are not Turkish.   As stated in the Concise Encyclopedia of Languages of the World (Elsevier, 2010) in the entry on Turkic languages, "There is no mutual intelligibility throughout the family today."  Of the main Turkic languages, only Azerbaijani is mentioned in this book as having a high degree of mutual intelligibility with Turkish, yet Azerbaijani is still classified as a separate language.
Mainstream linguists do not accept the idea that the Turkic language family is a single language.  Azerbaijani, Kazakh, Kyrgyz, Tatar, Turkmen, Uighur, and Uzbek, the principal Turkic languages, are considered to be separate, distinct languages, not dialects.  This is not controversial.  It is widely accepted in the scholarly community.
Even if one assumes that the "220 million" figure for number of speakers is intended to refer to the entire Turkic language family and not just one language, this estimate is still questionable.  The website of the Turkish Language Flagship Center of Indiana University in Bloomington states that "The total  number of speakers within this [Turkic] family may be estimated at between 150 to 170  million."  An estimate of approximately 150 million can also be found in the "Dictionary of the Turkic Languages," by Kurtulus Oztopcu et al (Routledge, 1996).
More misleading assertions can be found on this Concept Schools webpage.  A table is shown that purports to rank languages by number of native speakers: 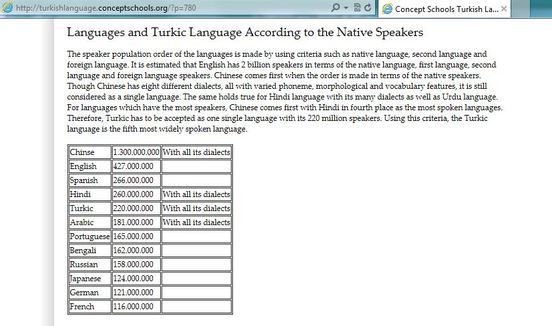 As can be seen in this image, this webpage is ranking a non-existent language called "Turkic" as number five in the world in terms of native speakers.  No mainstream, objective linguist would accept such a ranking.  For example, Ethnologue ranks Turkish as #23 by number of first-language speakers.  There is a disingenuous attempt here to capitalize on the fact that there is not universal agreement about whether or not to count Chinese, Arabic, and Hindi/Urdu as single languages.  However, these cases are completely different from the Turkic languages.  Chinese and Arabic both have quite divergent spoken variants but identical, standardized written languages, and Arabic even has standardized spoken variants.  In the case of the Hindi/Urdu split, different written languages are used, but the spoken languages are very similar.  None of this has any parallel with the relation of Turkish to all other Turkic languages.  There is neither a standard written language across the Turkic world, nor a state of mutual intelligibility that could justify lumping all these languages together.  Further, as already noted, there are not 220 million native speakers of Turkic languages.
The above-mentioned Concept Schools webpage also has a section entitled "Teaching Turkish Language In the World," which states "At the present time [2012], there are 87 countries where Turkish is taught in secondary schools."  For the most part, this refers to teaching of Turkish in Gulen schools around the world, and not to any actual, significant demand for middle or high school Turkish classes in these countries.  In fact it seems likely that many Gulen schools in non-English-speaking countries attract parents and students because they teach English; the Turkish classes are arranged as an obligatory accompaniment that parents may accept but often do not particularly want.
Why all this is wrong

If Gulenists wish to live in a fantasy world where the importance of their language is exaggerated, does it matter?  If they were not running publicly-funded charter schools, it would be their own affair.  However, when an organization that runs a network of 27 charter schools in 7 states, and is ever seeking more schools and more students, posts misinformation on its website for ideological reasons, it should concern all Americans.  Our public schools should be educating students, not exposing them to nationalistic propaganda.

Allowing a single group, especially one with a propagandist agenda, to have too much control over a network of public schools is asking for trouble.  Extremely lax oversight of charter schools is asking for trouble.  Traditional public schools have prohibitions against nepotism or favoritism in hiring, so that no particular national origin or group membership dominates and foists its ideology on students.  The curricula, materials, and websites of these schools are not allowed to contain propagandist statements that serve special interests but that go against mainstream teachings.  Such controls are not mere "bureaucracy;" they are necessary to prevent abuse.

Defenders of Gulen charter schools invariably fixate on the fact that "they are not teaching religion in the classroom," as if that excuses everything.  How is attempting to indoctrinate students in nationalistic thought, with patently false assertions, somehow made excusable merely because "it is not religious"?
Not a "slip-up," but a recurring pattern of nationalistic propaganda

The exaggerated claims made on the Concept Schools website are not an isolated case.   The following shows part of a poster, asserting that Turkish is "the 5th most spoken language in the World," which was found on the website of the Sema Foundation, a Gulenist organization in Arizona.  A virtually identical poster was shown on the website of the Divan Center in North Carolina, also Gulen-affiliated. 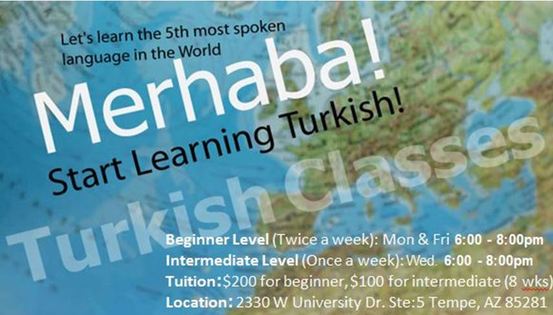 The Turkish Cultural Center in Pittsburgh (also Gulenist) produced a similar fallacious claim on its poster: 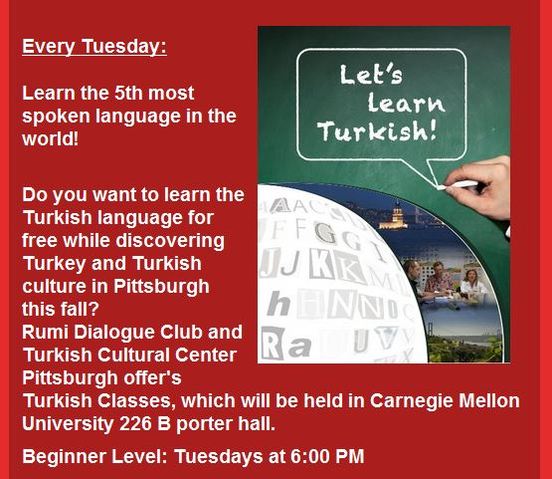 The Turkish Cultural Center of New York, widely known to be one of the more prominent Gulenist organizations in the US, claimed on its website that Turkish is spoken by 250 million people, a blatant exaggeration.  This claim was also found on websites of several branches of the Istanbul Center and the South Carolina Dialogue Foundation (both are Gulenist) and the Bosphore Academie (a private Gulen school in Tunisia).  The following two snips show the fallacious claim as well as the affiliation of turkishclassesny.com with the Turkish Cultural Center NY:

Then there was the Fox News anchorman in Houston who, no doubt working off one of the Gulen Movement's press releases, apparently announced on the air that "more than 250 million people speak Turkish worldwide..." This was by way of introduction to the Turkish Language Olympiads, described by sociologist Joshua Hendrick as "an annual GM pageant of Turkish nationalism."  The broadcast can be viewed (as of April 2013) on the channel of the Gulenist Raindrop Turkish House at http://www.youtube.com/watch?v=HI_HdtkEyjQ …
Scholars put the actual number of speakers of Turkish at around 65-85 million people.  Bernd Kortmann and Johan van der Auwera, in their book "The Languages and Linguistics of Europe" (Walter de Gruyter, 2011) estimate approximately 70 million.  In "Turkish, a Comprehensive Grammar" (Routledge, 2005), Asli Goksel and Celia Kerslake write that "it can probably be stated with reasonable certainty that Turkish is spoken as a first language or with native fluency by about 65 million people worldwide."
The attempt to "enhance" the number of speakers of Turkish has also resulted in a Wikipedia page war.  On the Wikipedia page entitled "Turkish Language," it has been possible to observe a fluctuation in the number of native Turkish speakers from 63 million, to 89 million, to 220 million, and then back to 63 million, all in a matter of about a month.  This can be seen in the following links:
Page edited on March 16, 2013 by Ahmet Fahri Sezgin to change number of native speakers from 63 million to 89 million:
http://en.wikipedia.org/w/index.php?title=Turkish_language&diff=prev&oldid=544631604
Page edited on April 10, 2013 by "Amateur55" to change the number of native speakers to 220 million: http://en.wikipedia.org/w/index.php?title=Turkish_language&direction=prev&oldid=551099359
Page edited on April 19, 2013 to return the number of native speakers to 63 million:
http://en.wikipedia.org/w/index.php?title=Turkish_language&oldid=551099359
Wikipedia page wars have also been observed with other articles that concern the Gulen Movement, such as those about the Movement itself, or about Fethullah Gulen.
Where could such an inflated figure as "250 million" (or "220 million") even come from?  Only the Gulen Movement knows, but perhaps they are using the total number of speakers of a controversial proposed language family called the "Altaic languages."  Many linguists now dispute that such a family exists.  Merrit Ruhlen, in his book "A Guide to the World's Languages: Classification" (Stanford University Press, 1991) included Japanese, Korean and Mongolian, along with the Turkic language group, in the so-called "Altaic family," and estimated 250 million speakers.  If this is indeed the source of the "250 million" number, then Japanese, Koreans, and Mongolians would all be quite surprised to learn that, according to the Gulen Movement, they are actually Turkish speakers!