Some of Concept Schools' favored vendors or landlords: These businesses are intertwined with Concept Schools and its member schools, as well as the Gulen Movement network, as can be seen in the following diagram 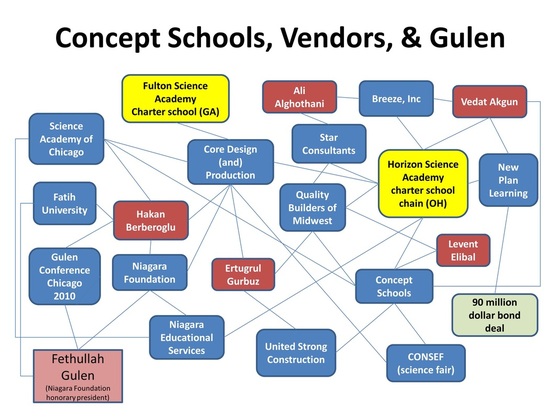 A building permit publicized in the Toledo Legal News, dated Nov 18, 2011, in connection with demolition and construction at the property located at 630 S Reynolds Rd, Toledo, Ohio (the current address of Horizon Science Academy Springfield) shows owner as New Plan Learning, applicant as Star Consultants Inc, and contractor as Quality Builders of Midwest.

From the "Authorized Abuse: Sponsors, Management and Ohio Charter School Law"
by Policy Matters Ohio  (link)
"The management organization Concept Schools also engages in related-party deals that
raise questions about issues raised in this study. The fiscal year 2009 state audit for
Horizon Science Academy – Cincinnati shows that former Concept CEO Vedat Akgun filed the articles of incorporation for the school with the Ohio Secretary of State. The
audit states that Akgun signed the management company contract and the copier lease.  Akgun also served as founding director of the Horizon Science Academy in Dayton and as president of Breeze, Inc., the property owner and manager of the school’s building."

Columbus Local News on Sep 2, 2009, reported on the construction of Horizon Science Academy Middle School.  Ali Alghothani is mentioned as "project architect and vice president of Star Consultants Inc."  The article further states "Breeze Inc., the parent company of Horizon, owns a total of 12 schools in Ohio, with two in Cleveland, four in Columbus, two in Dayton, one in Lima, Lorain, and Cincinnati, and one in contract in Toledo," and then "The former dealership property [2350 Morse Road] was sold to Concept School in May for a purchase $1.5 million. Renovation costs are estimated to be $1.8 million, with further expansion costs estimated in the range of $3 to $4 million, according to information from the academy."
Some projects Star Consultants has managed: