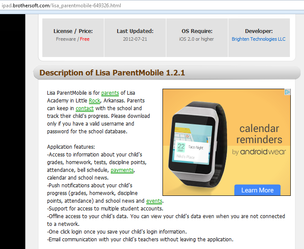 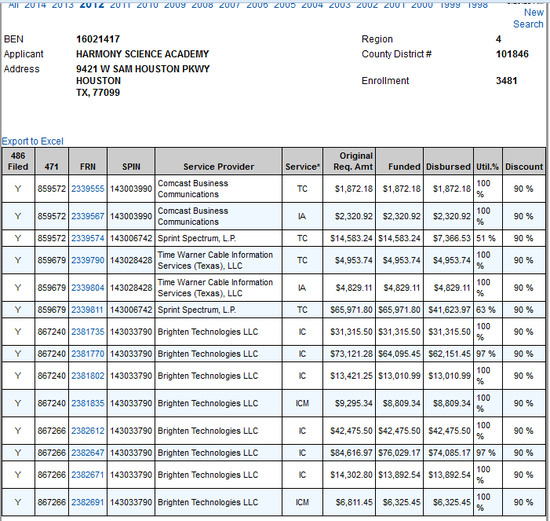 CALIFORNIA: Magnolia Public Schools
A July 11, 2014 article in LA School Report (link) entitled " ‘Fiscal mismanagement’ cited in closing 2 Magnolia charters" reported on LAUSD's decision to terminate the charters of two Magnolia Science Academy schools based on the findings from an audit.  The article mentioned as one finding that "The parent company paid another non-profit called Accord $3 million dollars to carry out services, what it says is a third of its budget, and which has overlapping responsibilities with the charter operator such as accountability, curriculum development and professional development."  These payments of $3 million represent a related-party deal; numerous ties between the Accord Institute and Magnolia Public Schools can be shown.  To cite just one of the numerous ties, Suleyman Bahceci, formerly Chief Executive Officer at Magnolia Educational & Research Foundation, is now Chief Executive Officer at the Accord Institute for Education Research.
FLORIDA: River City Science Academy, Jacksonville
On January 9, 2014, The Daily Record of Jacksonville FL (link) reported as follows: "River City Science adding gym: The former Florida Coastal School of Law site along Beach Boulevard has become the River City Science Academy charter school and now the closed restaurant to the east will become the school's gymnasium. ....the agent is Blue Ocean Construction Inc...."   Blue Ocean Construction has one officer on record: Mehmet F Taskan, a.k.a. Mehmet Fahrettin Taskan, an individual who has been involved in other Gulen charter schools (see here).  This construction project is a related-party deal.
GEORGIA: Fulton Science Academy Middle School, Georgia
A June 2012 audit of Fulton Science Academy Middle School was covered by the Atlanta Journal-Constitution with the headline  "Audit reveals ‘egregious' conduct by charter school."  The article began: "An Alpharetta charter school has spent taxpayer money to hire workers from overseas, run international field trips without proper supervision and give business to a related non-profit, an audit released Tuesday shows."
ILLINOIS: Chicago Math & Science Academy
On Dec 23, 2013, the Chicago Sun-Times reported (link) on how Edip Pektas, Chicago Math and Science Academy's board president, made $100,000 on a bond deal involving New Plan Learning, the corporation leasing facilities to the school.
MASSACHUSETTS: Pioneer Charter School of Science
On Feb 21, 2013 the Boston Globe reported (link) on related-party deals at the Pioneer Charter School of Science.  It was found that 3 corporations (Apple Educational, Technotime Business Solutions, and Lotus ­Media) received $218,646 from ­Pioneer, and that $40,534 was paid to the Kulen Law Firm for immigration-related expenses for teachers.  All these businesses are tied to the Gulen Movement.
NEW JERSEY: Paterson Charter School for Science and Technology, Paterson
A 30 million bond deal in New Jersey involved a 3-way agreement between Apple Educational Services, a Gulenist provider that contracts to many Gulen charter schools in the northeast US, Milkyway Education Center, a Gulenist corporation that is also a Turkic American Alliance member, and Paterson Charter School for Science and Technology.  The agreement included a land sale from Milkyway, that amounted to a direct financial tie to the Gulen Movement.  Paterson now leases the facilities from Apple, an arrangement that Gulenists have repeatedly set up across the country.
NEW MEXICO: Albuquerque School of Excellence
The following is an excerpt from a document entitled "Response To the Report to the LEGISLATIVE FINANCE COMMITTEE: Charter School Facilities Lease Assistance and Capital Outlay Planning."  It suggests that Albuquerque School of Excellence is paying excessive lease rates to Solidarity Investments LLC.

The charter school's landlord, Solidarity Investments, LLC, has the same mailing address as the school itself, namely 13201 Lomas NE Blvd, Albuquerque NM.  Levent Ulusal is listed as an officer.  This same Levent Ulusal ran Solidarity Contracting, a corporation that has done large construction jobs for Gulen charter schools in Texas (Harmony Public Schools chain).  (Read here about what Levent Ulusal did to Texas contractor J.R. Johnson.)  Indeed, in a 2011 article in Construction Leaders Today featuring Levent Ulusal, it is stated that "The company [Solidarity Contracting] has plans to expand into New Mexico in the near future."  Ulusal is also mentioned in a prominent 2011 New York Times article on related-party transactions in the Harmony schools: "Records show that Solidarity is run by Levent Ulusal, a civil engineer with a prior connection to Harmony: he was a school business manager until March 2009, when he joined Solidarity." The article links Solidarity to TDM, a Gulen-affiliated Texas corporation that has received tens of millions in construction contracts from the Harmony schools. 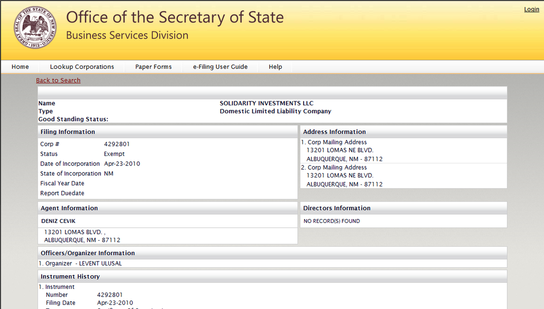 NEW YORK: Buffalo Academy of Science Charter School, Buffalo
An audit from the New York State Comptroller’s Office faulted Buffalo Academy of Science Charter School for its facilities lease from Apple Educational Services.  The Buffalo News reported: "Auditors estimated the corporation’s costs for buying and renovating the building, plus interest, at $1.9 million and noted that rent during the 15-year lease would total more than $4.4 million, 'a return on its investment of more than 200 percent.' "
NEW YORK: Rochester Academy Charter School (RACS)
An audit of Rochester Academy Charter School by Office of the New York State Comptroller, for the period July 1, 2011 – March 1, 2013 stated: “RACS did not have sufficient Board approved policies and procedures over the procurement process. Such policies and procedures would provide guidance on when and how to solicit competition, documentation requirements to support purchasing decisions and payments. As a result of this weakness, we reviewed 762 disbursements totaling $320,000 to determine if the disbursements were for school purposes, properly supported by a detailed original receipt and, where applicable, to ensure compliance with the school’s charter. We found that RACS used restrictive practices in some of their purchases,which undermine the intent of true competition.”
NEW YORK: Syracuse Academy of Science Charter School, Syracuse
On July 11, 2013, the Post-Standard of Syracuse NY reported on a state audit showing related-party deals at Syracuse Academy of Science Charter School.
NORTH CAROLINA: Triangle Math and Science Academy, Raleigh
Pera Construction, a business with Gulenist ties, got the contract for a $2,744,000 building project, for the Triangle Math and Science Academy in Raleigh (details).
OKLAHOMA: Dove Science Academy, Oklahoma City
A June 2012 audit of Dove Science Academy in Oklahoma City found that Dove Science Academy had made $330,000 in lease payments to the Sky Foundation, its charter holder.  This was a related-party transaction; indeed, it was mentioned under a section heading called "Related parties."
OKLAHOMA: Dove Science Academy, Oklahoma City
A June 30, 2013 audit of Dove Science Academy reported as follows: “Related Parties: ...In addition, these schools [Dove Science Academy branches] are all a part of the Sky Foundation, Inc. which was established in Stillwater, Oklahoma. The Dove Science Academy No. E-005 made $624,000 in lease payments to the Sky Foundation, Inc. during the fiscal year ended June 30, 2013.”
PENNSYLVANIA: Young Scholars of Central Pennsylvania
A March 2013 audit of YSCP by Eugene DePasquale, Auditor General of Pennsylvania, reported: “Possible Ethics Acts Violations.  Our audit of the Young Scholars of Central Pennsylvania Charter School (Charter School) found potential conflicts of interest and violations of the Public Officials and Employee Ethics Act (Ethics Act) resulting from transactions between the Charter School and the related nonprofit organization (nonprofit organization/landlord) it was renting its building from.  The Charter School and its landlord are related party entities by way of sharing common officers.  Consequently, the same individuals were involved in the approval, administration, and oversight of the lease agreement between these related parties.  Moreover, these relationships may result in the Charter School being ineligible to receive state lease reimbursement for its building.”
PENNSYLVANIA: Young Scholars of Western Pennsylvania
On Oct 13, 2011, the Pittsburgh Tribune-Review reported on the school's facilities lease (link), noting that "In May 2011, a nonprofit organization, Dream Schools of State College, using the name Newport Drive Properties, purchased the building and its 3.78-acre site for $800,000, according to Allegheny County real estate records. Dream Schools formed Newport Drive Properties, which is also a nonprofit organization, to purchase the property, school officials have said."  The Baldwin-Whitehall Patch, in a April 6, 2011 article (link) stated that " The company 'Newport Drive Properties' will now own 600 Newport. Newport Drive Properties is owned by 'Dream Schools, Inc.,' and functions solely for the purpose of owning 600 Newport and leasing it out to Young Scholars."  The school's annual report for the 2012-13 fiscal year states that "In 2011, the School entered into a two-year lease with Newport Drive Properties, Inc. The term of the lease is for the period of September 1, 2011 through August 30, 2013 and provides a base annual lease cost of $207,334, adjusted annually. Under this agreement, the School paid approximately $174,000 to Newport Drive Properties Inc. for the fiscal year."  Dream Schools is a Gulenist corporation; Sait Onal, who has had affiliations with the Gulenist Red Rose Intercultural and Educational Foundation, has been one of its officers.  This lease deal with Dream Schools, a.k.a. Newport Drive Properties, is a related-party deal.
TEXAS: Harmony Public Schools chain
On June 6, 2011, a detailed, front-page-over-the-fold article in the New York Times reported on millions of dollars of related-party contracts in the Harmony Public Schools network, the largest chain of charter schools in Texas.

....
The above list is just a small sampling.  Most of these insider deals are buried in documents that are still hidden from public view.  This is why charter schools should be legally obligated to disclose their lease agreements and major vendors on their websites (see "Reform Laws Needed" page).