Waiting for the government to take action﻿﻿

Page created July 6, 2014
The passivity of parents, taxpayers, public officials, and (until recently) the press regarding Gulen charter schools has been remarkable.  Press attention and government action have only begun after a lengthy lag time.

This diagram was posted on Twitter in 2012 to illustrate how responsibility for Gulen charter schools has been passed around: 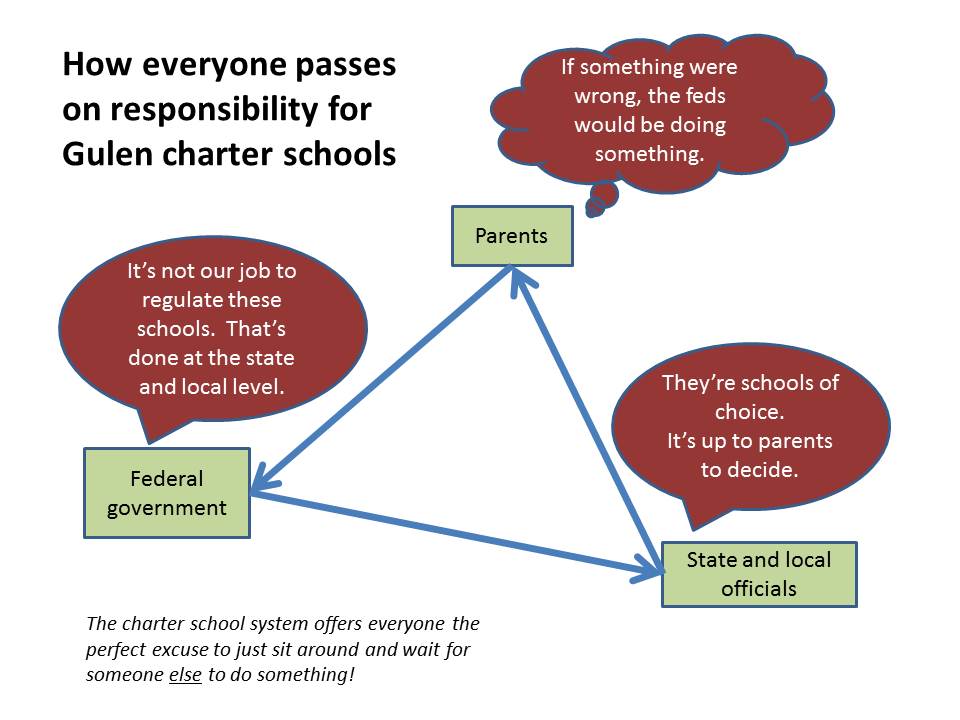 With FBI raids on the Kenilworth Science and Technology Charter School on December 11, 2013, and FBI raids of 19 charter schools managed by Concept Schools in Ohio, Illinois and Indiana in June 2014, there are signs that our government may finally be taking action against some of the financial abuses occurring in Gulen charter schools.

However, new Gulen charter schools have been approved for fall 2014 opening, and there are active applications for fall 2015.  Existing schools continue to expand, getting more tax dollars for each additional student.

There are many reasons to object to the entire Gulen charter school chain, not just the schools that have been raided or investigated so far.  Some of what is objectionable may even be legal under current (overly lax) laws.  Not everything that is legal is right or good for society.

As shown, for example, by the cases of Enron or Bernie Madoff, it can many years for the government to take action against fraud or abuse.  Parents and citizens should not be lulled into complacency.  Common sense must be used, and when it is clear that something is wrong, citizens should act themselves and not simply sit around assuming the government will take care of the matter.  Between the time when abuses begin and when federal prosecutors are confident enough that they have gathered enough evidence for a strong case, much damage can be done to society.  Citizens have the power to take action by raising awareness, writing letters to public officials, attending board meetings, spreading the word in their community, doing their own research to the extent possible, and voting with their feet.

Another good case to reconsider is Libby, Montana.  How many of residents of this community assumed that they should not worry about the dust that covered their town, because if it were harmful, surely the government would have "done something"?  By the time our government finally took action, entire families were already slowly dying from asbestos exposure.

Our government is not perfect, has a large moment of inertia, and is not some sort of parent who can be relied upon to keep constant watch over us every second to ensure our safety.  Powerful interest groups continually seek to keep us uninformed or misinformed as they harm our society, abuse our tax dollars, lobby to weaken the regulations intended to protect us, and strategically give campaign contributions to dissuade public officials from objecting or investigating.  The citizenry must constantly remain alert to this.