The Gulen Movement is a unified, highly coordinated and disciplined group with complete control over the finances of the nation's largest chain of publicly-funded charter schools.  Under the current system of extremely lax regulation of charter schools, Gulenists encounter no obstacles as they seek to steer nearly every aspect of school business to their own network.  This is collusion, and it should not be allowed, regardless of whether or not one perceives the schools as providing quality education.  There is an immense conflict of interest in all these related-party transactions.

Consider all the possible business opportunities a charter school offers: 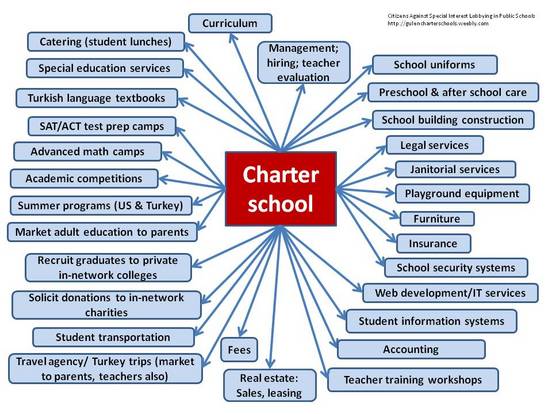 A tightly interconnected group of Turkish businessmen controls the Cosmos Foundation and the companies that Harmony Public Schools purchase goods and services from.  The School of Science and Technology branches are also involved.  These are related-party transactions and they are unethical.

A superbly researched article from June 6, 2011 by Stephanie Saul of the New York Times, entitled "Charter Schools Tied to Turkey Grow in Texas," gives detailed information about some of these transactions. 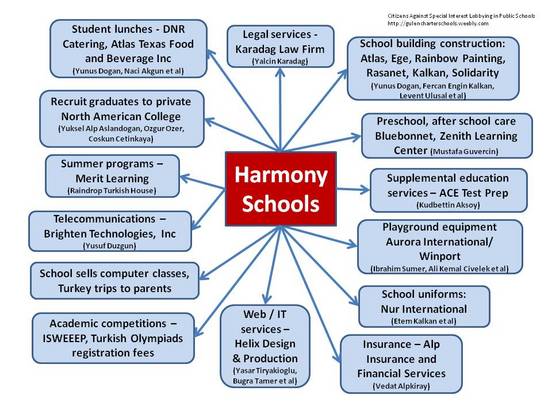 How bids from non-Gulenist companies are handled: a case study from Paterson Charter School for Science and Technology

The July 23, 2008 board minutes of Paterson Charter School for Science and Technology are  revealing as to the methods used to eliminate non-Gulenist bidders for contract business for the school.

Here is quoted text from those minutes:
"SR08-99: To approve the recommendation of the Lead Person following resolution:
WHEREAS, Paterson Charter School for Science & Technology (“PCSST”) advertised
for the submission of bids for Project No. 08-02, Classroom Alterations and Site
Improvement,
WHEREAS, at a public bid opening conducted on July 15, 2008, PCSST opened two
bids received in response to its advertisement;
WHEREAS, the bid submitted by Dogan Painting and Construction Inc., does not
include all required items and therefore is materially defective; and
WHEREAS, the bid submitted by C & E Contracting Inc. is the lowest bid with no
material defect, but the amount of this bid substantially exceeds PCSST’s cost estimate
for the project; now, therefore
BE IT RESOLVED, that all bids submitted in response to the advertisement for bids
on Project No. 08-02 shall be and hereby are rejected, as the amount of the lowest nondefective
bid substantially exceeds PCSST’s cost estimate for the project."

Clearly the school administrators wanted Dogan Painting and Construction to get the job, because it was a Gulenist business.  When C & E Contracting underbid them, all bids were scrapped on the grounds that the lowest bid was still too high.

In the end, however, Dogan Painting did somehow land the school's contract.  Screenshots taken in May 2010 of the now-defunct website doganpainting.com showed the following client list:

Beehive Science and Technology Academy in Utah and Sonoran Science Academy in Arizona use a series of Turkish textbooks called "Ebru Turkce 1 Ders Kitabi," "Ebru Turkce 2 Ders Kitabi," etc.  The only US supplier of these books is AntStores, a Gulenist business in New Jersey.  (Note: "ant" means vow or oath in Turkish.)

The June 9, 2010 board minutes of Paterson Charter School for Science and Technology show that it was leasing property from Milky Way Education Center, Inc.  This company, also known as Milkyway Education Center, runs the Pioneer Academy of Science, a private Gulen school with two branches in New Jersey.  These same minutes show Paterson granting a contract to Apple Education Services, Inc. to provide the Summer Enrichment Program services.  Apple is a Gulenist company; Ahmet "Matt" Anar is/was its officer, and he was also an officer of the Paterson school.

The October 31, 2007 board minutes of Paterson Charter School for Science and Technology show the following item: "SR08-17.To approve the recommendation of the Lead Person to approve a payment for Mr. Taz Ozdemir, Technology & Assessment Coordinator, associated with software developing service for Staff Time Keeping System in the amount of $1,500."  Murtaza "Taz" Ozdemir is a well-traveled Gulenist who was affiliated with Paterson and several other Gulen schools.

Member schools of the Horizon Science Academy chain in Ohio lease, or have leased in the past, building facilities from Breeze, Inc. and New Plan Learning, both Gulenist companies with chief officer Vedat Akgun, who has also been an officer of Horizon schools and has affiliations with Concept Schools, which manages the Horizon schools.

Westwood Productions, a Gulenist company registered to Ahmet "Matt" Avsaroglu, has produced websites for Magnolia Science Academy schools, which are a chain of Gulen charters in California.  His wife Sumeyra Avsaroglu, a.k.a. Sumeyra Avsar is affiliated with Magnolia.  Ahmet Avsaroglu himself is affiliated with Bay Area Technology School, another Gulen charter school in Callifornia.

Apex Education produced the MagnoXP (school information system) for Magnolia.  Connections between Apex, the Accord Institute for Education Research and the Pacifica Institute are explained on this page.

Horizon Science Academy offers childcare services through Horizon Child Development Center, which is owned by Huseyin Kara, who also has affiliations with the Horizon schools.

Syracuse Academy of Science plans to rent a facility from the Terra Science and Education Foundation.  A May 28, 2011 article in the Syracuse Post-Standard stated that "Fehmi Damkaci, a Syracuse Academy board member and an assistant professor at the State University of New York at Oswego, is affiliated with the Terra foundation, which is based in Syracuse, Hayali said. The Syracuse Academy will pay the foundation roughly $20,000 a month in rent and related costs to use the St. James building, he said."  The article also noted that "The foundation was established recently to support a network of charter schools in Buffalo, Rochester and Syracuse..." making it likely that similar deals will transpire with the Buffalo Academy of Science Charter School and Rochester Academy Charter School.

The 2008 Form 990 for Abramson Science and Technology Charter School, a Gulen charter in Louisiana, shows "management consulting" fees of $238,595 paid to the Cosmos Foundation, a Gulenist corporation which runs the Harmony Public Schools and helped found Abramson.  The form also shows that Abramson paid Prestige Commercial Cleaning and Construction $116,766 for contract work.  The officers of Prestige are Ali Tuncer and Ufuk Tuncer.

Money can also be made off charter schools by charging fees.  While tuition, which is money paid to secure a space at a school, cannot legally be charged by charter schools, fees, which are paid for consumables, are allowed.  Fees can also help in recruiting a more selective student body (more dedicated and/or wealthier parents).

A newsletter from the website of Beehive Science and Technology Academy showed the school charging a "registration fee" of $195.

Washoe County School District auditors determined that Coral Academy of Science in Reno, Nevada was charging an average of $273 per student per semester.  A line from the audit states that "Because the school kept no detailed records (by grade) of what the remaining $227 was spent on, WCSD [Washoe County School District] auditors were unable to determine if the remainder of this 'consumable' fee was actually spent on consumable materials."

Lotus School for Excellence has a nonrefundable $50 student fee that must accompany a student's application.