Because of the Gulenists' relentless public relations efforts, Gulen charter schools have managed to garner favorable publicity.  However, not all the claims that members of the press have obligingly reproduced stand up to scrutiny.  Some examples are given here.

Claim that Harmony schools do not emphasize preparation for standardized tests

One example is given by the following statement in William Martin's article, "Head of the Class," covering the Harmony Science Academy charter schools run by the Cosmos Foundation in Texas.  It appeared in the August 2010 edition of Texas Monthly:
"At every school I visited, teachers conceded that doing well on the TAKS is important but that it does not consume their lives. “When I first came here, it immediately struck me that Harmony is not a TAKS-oriented school,” said Jennifer Butcher, a teacher at HSA-Laredo. 'They were actually teaching the curriculum. At public schools I’ve worked at, they were always passing out practice tests. Here I actually get to teach history, science, grammar, and everything they need to learn. It’s not just TAKS.' "

At the website of Harmony Science Academy - Euless, a document entitled "Testing Calendar 2010-2011" shows that the Harmony schools plan to have four separate sessions of practice "MOCK TAKS" tests, with each session lasting one week: 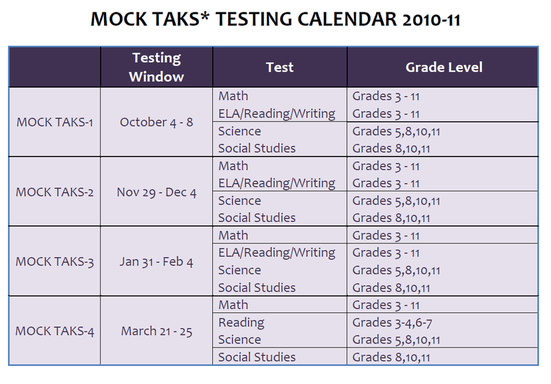 One point the Texas Monthly author may not have considered is that teachers currently employed by the Harmony schools are surely well aware that any statements they make to the press that appear unfavorable to their employers could lead to their losing their positions.  Interviewing former teachers is likely to be more illuminating, although even they might have concerns about retaliation.  How open teachers are about the school they work (or worked) for is likely to be influenced by the current job market for teachers, which is extremely unfavorable (cf. New York Times, May 19, 2010 "Teachers facing weakest market in years.")

A second example occurred in two Houston Chronicle articles, one from March 22, 2011 and another from Feb 28, 2011.  The latter article stated that "Students say they prefer Harmony's small student-teacher ratio, usually 12-to-1."  The former stated that Harmony School of Excellence Houston "has a 12:1 student/teacher ratio."  The following graph, based on the Texas Education Agency's 2009-2010 AEIS reports, shows that the student:teacher ratio in nearly all Harmony Public Schools is higher, in some cases significantly higher, than the Texas state average.  It is also noticeably higher than 12-to-1. 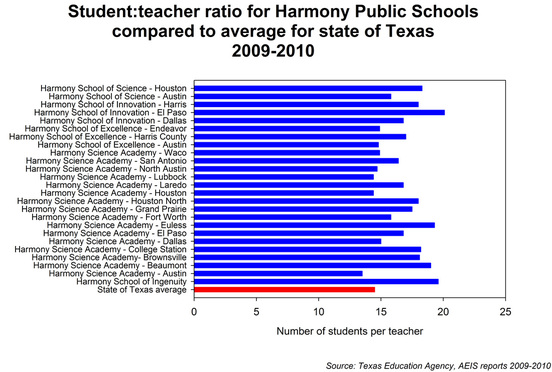 "With test scores down and the dropout rate up, everyone’s looking to fix Texas’ schools. Has a Turkish Muslim who has been influenced by the teachings of an obscure philosopher found an answer? Just ask the hundreds of at-risk students who have graduated from his charter schools."

This is clearly intended to imply that these schools are particularly geared towards serving at-risk students.

The following graph shows that the percent of at-risk students in all Harmony Public Schools is much lower than the state of Texas average: 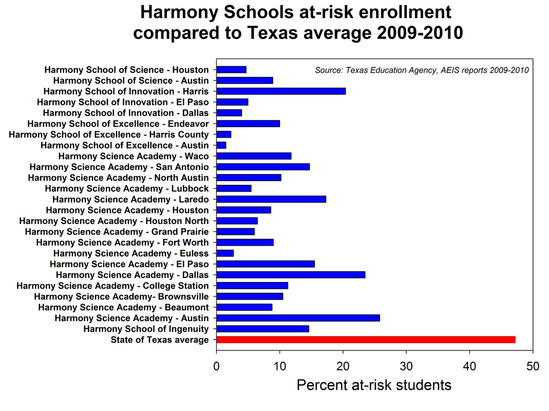 Martin may have confused "economically disadvantaged" with "at risk."  These two populations have some overlap, but they are not the same.  There are poor families who value education and provide an academically supportive environment for their children, and who have relatively easy-to-educate students, and Harmony seems to target these families.  Interestingly, there are parallels here with Gulen schools in Turkey and indeed around the world.  The report "Being different in Turkey," (one of whose authors, incidentally, is prize-winning journalist Nedim Sener, now in jail and widely believed to have been targeted for writings critical of the Gulen Movement) states that "We think the alternative that the Fethullah Gulen community has developed within the system of education is a product of the inefficient state policies in this area. ...It is evident that the community has directed its activities in the field of education particularly towards clever and hardworking students of poor families."

Moreover, a Texas Tribune article covering the Harmony schools, from Sep 27, 2010, stated that "Like many charters, Harmony purposely does not offer transportation, partly as a matter of cost concerns but mostly out of a desire to demand a family investment, Tarim says."  This statement also strongly suggests that the Harmony schools are selective and are not oriented towards the at-risk population.  Almost by definition, at-risk students would not have a family investment behind them.