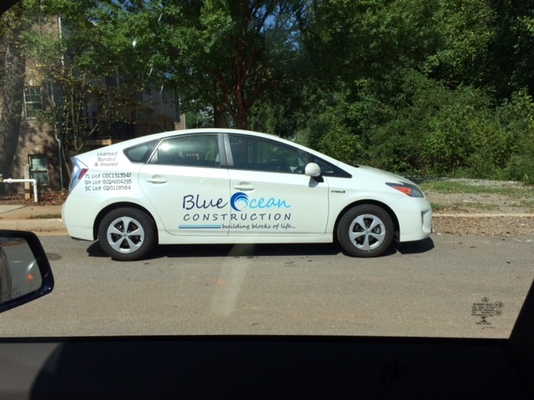 A Blue Ocean Construction vehicle parked in front of the Fulton Science Academy Private School construction site in Alpharetta, Georgia, in August 2014. This related-party Gulenist vendor has also been involved in facilities construction for several Gulen charter schools in Florida and South Carolina.
Blue Ocean street address is sam﻿e as that of GREEN Charter School

This address is shared by:
Each U.S. region has its charter school facilities construction vendor

The Gulen Movement manages its charter schools and other organizations by dividing the US into 6 areas, as shown on the organizational chart at the bottom of this page.  Each region has an umbrella management organization and vendors for its charter schools.  For example, the schools overseen by Harmony Public Schools, in TX, OK, NM, AR and LA, have used Solidarity Contracting for building construction.  (Before Solidarity there was Atlas, Rasanet, etc - the names and principal officers of these businesses constantly mutate, dictated both by the "strategic ambiguity" tactics of the Gulen Movement and its policy of continually rotating its members around its entities.  Regardless of these mutations, these are all related-party vendors.)

These Gulenist construction vendors appear to be, in actuality, shell companies.  They typically have no true physical plant, are in business for only a short period of time, and their corporate address is generally a residential house where one of the corporate officers lives.  Their "portfolios" and "satisfied client" references are typically made up entirely or almost entirely of jobs within the Gulen network.  Bona fide non-Gulenist local construction companies and contractors are generally hired to do the actual construction work.  The Gulenist contractor can charge overhead, of course.

This list is very likely not complete.  The evidence that Blue Ocean did construction for these Gulen charter schools is elaborated on further down.In addition, Blue Ocean Construction has done jobs for private Gulen entities:The closely-related NOSS Construction has contracted to:Both Blue Ocean and NOSS have also done work for several other private Gulenist businesses (restaurants etc) that are not the concern here.
Gulen Movement connections

Blue Ocean Construction has a number of ties to the Gulen Movement and Gulen charter schools (see chart below).  Through Serkan Saglam, Blue Ocean Construction is tied to NOSS Construction, which has contracted to the charter schools operated by Fulton Educational Services in Alpharetta GA.  A June 1, 2012 forensic audit commissioned by Fulton Couty Schools that investigated vendor relationships with Fulton Science Academy Middle School (a publicly-funded charter school that lost its charter and is now a private school) identified NOSS Construction as a contractor for the three schools run by Fulton Educational Services.  The name NOSS appears in a connection chart in that audit, and it is not specified exactly which of the 3 schools it performed construction for.  However, the NOSS Construction website (accessed August 2014) listed the following as among the company's projects:

Note that the actual name of the first school is Fulton Sunshine Academy, and it is an elementary, not a middle school.  It is located in Roswell, not in Alpharetta.  It seems doubtful that NOSS Construction was truly unaware of this.  The actual name of the second school is Fulton Science Academy Private School, and it is abbreviated FSAPS, not FSAP.
NOSS Construction's owner, Nabi Ozturk, has ties to the Gulen Movement through the Cosmos Foundation of Georgia and the Turkish American Islamic Institute, both Gulenist organizations.  In the chart below, MAFTAA, Orlando Turkish Cultural Center, the Nile Foundation, and the Turkish American Association of Kentucky are all Gulenist organizations. 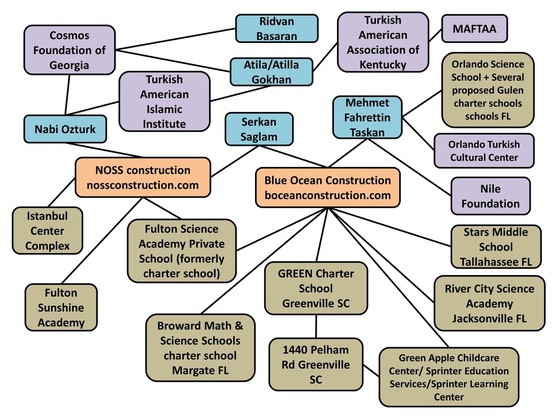 Blue Ocean Construction and NOSS Construction have a number of ties to the Gulen Movement and Gulen charter schools.
Blue Ocean Construction and the GREEN Charter School
The Blue Ocean Construction website (accessed August 2014) shows photos of the GREEN (Greenville Renewable Energy Education) Charter School, a Gulen charter school in Greenville SC, but does not name the school.  Instead, it refers to the property by the name of its owner, Pelham Oaks Plaza, LLC, which is a Florida corporation also registered in South Carolina.  It is certain that the photos on the Blue Ocean website are of the GREEN Charter School because they are 100% identical to photos identified as being of that school on the website (link) of Accent Photography, which shows them as part of its portfolio.  The March 11, 2014 board meeting minutes for the GREEN Charter School contain the following reference to the school's lease:
"Mr. Adem [Adem Dokmeci, the school principal]: The landlord requested advanced rent payments of $100,000. Then the Phase II construction would start on time. I request to pay the amount of $100,000 as a security deposit to Pelham Oaks Plaza during the months of April 2014 and May 2014. According to the agreement GREEN Charter will pay $25,000 less rent each of these months; August 2014, September 2014, October 2014 and November 2014."  The GREEN Charter school's Gulen Movement connections can be viewed here.
Blue Ocean Construction and River City Science Academy
The Jacksonville Financial News and Daily Record, in a January 9, 2014 article, stated:
"The former Florida Coastal School of Law site along Beach Boulevard has become the River City Science Academy charter school and now the closed restaurant to the east will become the school's gymnasium. ...  a gym would be built for the K-12 River City Science Academy at 7565 Beach Blvd. ...  The applicant is Yazan Khatib of property owner 7605 Beach Boulevard LLC and the agent is Blue Ocean Construction Inc.  Site development plans were prepared for River City Plaza LLC. Khatib also is a manager of that organization. ...  Plans show the 6,255-square-foot restaurant would be demolished and the 13,800-square-foot gymnasium would be developed on the 0.74-acre site east of the River City Science Academy charter school."
Blue Ocean Construction and Stars Middle School in Tallahassee FL
The Buildzoom website (link) shows several building permits for Blue Ocean Construction pertaining to 1500 Miccosukee Rd, Tallahassee, Leon County:Stars Middle School, a Gulen charter school in Tallahassee FL, is located (as of August 2014) at the 1500 Miccosukee Rd address, although this property does not appear to currently be under Gulenist ownership (the owner is apparently Tallahassee Memorial Healthcare, a neighboring hospital facility).  As can be seen from the Buildzoom website, Blue Ocean Construction nevertheless got a contract worth $87,500 to renovate the site for Stars Middle School.
Blue Ocean Construction and Broward Math and Science Schools
Broward Math and Science Schools is a Gulen charter school that opened in early August 2014.  It occupies a site at  6101 NW 31st St, Margate, Florida.  Dun and Bradstreet (link) also give this as the address of a Florida corporation called DAI, LLC.  The website of Blue Ocean Construction shows a project described as follows:
DAI, LLC
Owner: DAI, LLC
Location: Margate, FL Size (sqft): 29,590
Special Used: K-8 Public School
Finish Date: August-2012
This is clearly a reference to the Broward Math and Science Schools facility.
Gulenist ties of Yazan Khatib, charter school landlord
Yazan Khatib, apparently the landlord for River City Science Academy, and also, as owner of Pelham Oaks Plaza, LLC, the landlord for the GREEN Charter School, has ties to the Gulen Movement.  Khatib has written an article for Today's Zaman (link), the flagship Gulen Movement propagandist newspaper.  He is on the advisory board of the Istanbul Center (as of August 2014), an organization known to be affiliated with the Gulen Movement.  The Facebook page (link) of the Istanbul Cultural Center of Jacksonville shows Khatib's Aug 8, 2010 post "Looking forward to it thank you" in reference to one of the organization's events.

The website of Khatib's practice, the First Coast Cardiovascular Institute, states "Despite his busy practice, Dr. Khatib was always an active philanthropist, dedicated to inter-cultural dialogue and to the promotion of a greater understanding of the world we live in. He was the main sponsor of the Amity Center dialogue dinner “Alliance of Civilizations” in October 2009, as well as several other similarly themed activities like the first Annual Art and Essay Contest for middle and high school students at Florida State College in 2010 and 2011. ... He is also on ... the Advisory Board of Amity Turkish Cultural Center."  The Amity Turkish Cultural Center (ATCC) is a Gulenist organization; its official legal name is the Atlantic Foundation of North Florida.  ("Amity" and "Atlantic" are both favored by Gulenists in naming their organizations or schools.)  Another website of unknown ownership called "mydigitalpublication.com" has an article on Khatib stating that he "supports" the Amity Turkish Cultural Center. 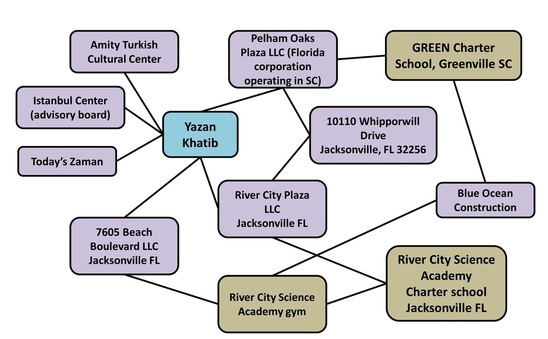 Blue Ocean Construction is also the name of an unrelated, non-Gulenist corporation registered in North Carolina.  A number of Gulenist entities have been found to use names identical to those already registered in other states by unrelated organizations or businesses, or names that are easily confusable with other corporations in the same state.  As this is a recurring pattern, it is believed to be another manifestation of strategic ambiguity.

In common with numerous Gulenist enterprises operating in the US, Blue Ocean Construction has applied for and obtained H-1B visas.  Such visas are intended to be for specialty occupations where there is a shortage of qualified US workers.  In 2012, its application for a Construction Project Engineer in Jacksonville FL was denied, but another application for a Project Engineer in Orlando FL was certified (link).  In 2014. two H-1B visas for Project Engineers in Alpharetta GA were certified (link).  It is difficult to believe that there is truly a shortage of qualified project engineers in Florida and Georgia.  All these visa petitions show wage offers higher than the prevailing wages determined by the Department of Labor.
Copy-paste: an economical way to produce websites

A pattern has emerged from observations of websites of numerous Gulenist businesses.  Text on the websites matches verbatim or near-verbatim text from similar, non-Gulenist businesses.  Because this is a recurring pattern, it appears likely that it is the Gulenist businesses who are doing the copy-paste.  This is consistent with already-known cases of plagiarism involving Gulen schools (see "The Gossamer Wings of Easy Promise.")  Compare the following:

Text from website of E I B Contractors, Texas (accessed August 2014)
"E I B understands the time-critical nature of commercial, office, retail, and health-care projects and has the experience and resources needed to meet aggressive, fast-track schedules while still delivering a high-quality finished project."

Final note to interested journalists: screenshots have been saved as evidence of all connections noted above.